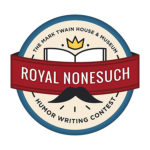 The Mark Twain House & Museum is pleased to announce the winners of its 2018 Royal Nonesuch Humor Writing Contest.

The program is open to all ages and awards three prizes each in Adult and Young Author categories. Judges considered 264 entries, from 34 states and 11 countries.

D.R. Beitzel, a writer and cartoonist living in Brooklyn, New York, was awarded the $1000 First Prize for Development Notes On God’s Pitch For Everything That Ever Was Or Shall Be. Beitzel has contributed to MAD Magazine and McSweeney’s Internet Tendency and is the creator of The Bagheads, an animated short produced by Frederator Studios. Learn more about him.

Scott Carpenter, an author and fiction teacher at Carleton College in Minnesota, took the $500 Second Prize for Squirrel Pie and the Golden Derrière. His book Theory of Remainders: A Novel was named one of the Best Books of 2013 by Kirkus Reviews. Learn more about him.

Sarah Zimmerman, a freelance writer and physician’s assistant in Detroit, received the $250 Third Prize for Hey, Barbie, What’s Your Sign? Zimmerman is co-owner of a vegan ice cream business, blogger, and contributor to websites such as The Belladonna Comedy, Robot Butt, and The Haven. Learn more about her.

Alisa Luu, a rising senior at Mission San Jose High School in Fremont, California, won the $1000 First Prize for Advice to an Incoming Freshman. In her cover letter she wrote, “This piece was written as a parody of Mark Twain’s “Advice to Youth” (where my opening paragraph was taken from).

Avah Dodson, a 10-year-old student from Lafayette, California, received the $500 Second Prize for Fractured Fairy Tales. She has written three books available on Amazon. Her short works of fiction have appeared in Skipping Stones Magazine and BAZOOF! Magazine.

Grace Regnier, a 16-year-old from Parker, Colorado, won the $250 Third Prize for Cold Turkey. Regnier writes, “From the time I was very young, I dreamed of being able to share my stories to the world. I was born in Minneapolis, Minnesota, but I now live in Parker, Colorado with my family, a cranky Calico, and a poorly shorn Golden Retriever. This is my first humor writing contest.”

The contest also notes entries from each category for Honorable Mention. Winners receive a $100 gift certificate from The Mark Twain Store.

In the Adult category: Incontinence: The Problem with Seeing a Man about a Horse by Alan Maislen; Understudy to a Matinee Jesus by Joe Dornich; and MAGAP U.S. Exceptionalism by Jackie Pick will receive honorable mention prizes. (Each receives a $100 gift certificate to The Mark Twain Store.)

In the Young Authors category: The Art of the Deal: A Beginner’s Guide to Becoming President in 2018 by Camille Doherty, and Sample by Julian Tucker will both receive honorable mention prizes. (Each receives a $100 gift certificate to The Mark Twain Store.)

A big thank-you to all who entered essays — and to our judges, who donated their services!