Author David Baldacci at The Mark Twain House May 16 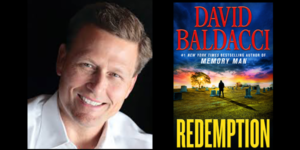 The Mark Twain House & Museum presents author and Twain House trustee David Baldacci, who will talk about his new thriller, Redemption. This Mark My Words event takes place on Thursday, May 16, at 7 p.m. at the Immanuel Congregational Church, across the street from The Mark Twain House in Hartford. This is the only public appearance Baldacci has scheduled in support of Redemption, which will be published on April 16.

Redemption is the fifth work in the wildly popular Amos Decker detective series, which began in 2015 with Memory Man. Decker’s special power is total recall, a result of his brain’s rewiring itself after a blow to the head in a football game.

The new book circles back to Decker’s first case, in which he may have made a mistake as a rookie detective, leading to conviction of the wrong man.

A former trial attorney in Washington, D.C., Baldacci published his first novel, Absolute Power, in 1996. The story was made into a feature film with Clint Eastwood as its director and star. All of Baldacci’s 36 adult novels have been bestsellers. He has published six novels for younger readers.

Baldacci was recently on WFSB’s “Better TV” show, talking about his new book and his support for The Mark Twain House & Museum.

Tickets to the talk alone are $40 and include a copy of Redemption.

Tickets to the talk (including a copy of the book) PLUS a VIP reception in the museum’s Hal Holbrook Hall preceding the talk are $90.

Tickets will be available EXCLUSIVELY TO MEMBERS OF THE MARK TWAIN HOUSE & MUSEUM from March 8 through March 22; they will go on sale to the general public on March 23. To take advantage of this and other benefits, become a member NOW.