Three Clemens Books Repaired Thanks to Grants from IMLS & Renée B. Fisher Foundation

Thanks to a Museums for America Grant awarded by the Institute of Museum and Library Services (IMLS) and a grant from the Renée B. Fisher Foundation Fund of The Community Foundation for Greater New Haven, three books in The Mark Twain House & Museum’s collection have undergone professional conservation treatment at the Northeast Document Conservation Center. The three books repaired were: Boat Life in Egypt and Nubia by William C. Prime, an Arabic translation of the New Testament, and a first edition of Mark Twain’s Sketches New and Old.

These three 19th century books were chosen for this project because of their importance to the study of Mark Twain and his era, and their current condition.  All three are more than a century old, and in some cases, were handled extensively before the Museum acquired them. It was critical to have the three books treated, so that they will be preserved for the future and the Museum can make them accessible to the public and for scholarly research. Conservation treatments included cleaning pages, mending tears, reinforcing sewing, and repairing and re-backing bindings.

All have direct connections to Samuel Clemens, more popularly known by his pen name “Mark Twain,” and provide valuable and unique insight into Twain’s life and work. Mark Twain was, of course, one of America’s most important writers.  He was also a voracious reader, and the books he read reveal much about Twain, as both a writer and a man. The Museum is fortunate to have in its collections over 300 books owned by the Clemens family or that Twain personally gave to others, including a wide variety of fiction, poetry, and nonfiction works demonstrating the breadth of his interests and the depth of the research that he did. 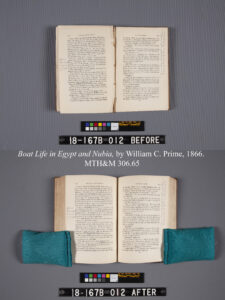 William C. Prime’s 1866 travel book Boat Life in Egypt and Nubia was one of two popular books Prime wrote about his travels in the Middle East. Clemens was not a fan of Prime’s work, and the book contains more than a dozen notations in its margins in which he made acerbic and humorous comments about its content. For example, at one point he wrote of the author, “What a braggart liar this man is.”

The 1867 Arabic translation of the New Testament was given to Clemens when he was a passenger on the SS Quaker City. The book was published by the American Mission Press 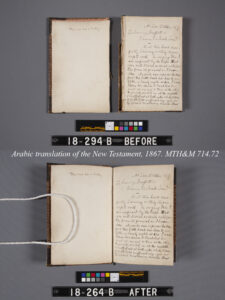 in Beirut, an innovator in Arabic publishing that was founded by the American Board of Commissioners for Foreign Missions.  Each passenger received a copy in which their name was inscribed in Arabic. Twain gave the book to his nephew Samuel Moffett, with an accompanying letter that has been attached to the book’s front flyleaf (technically written in the “back” of the book as Arabic is read right to left and back to front). The letter, which was written by Clemens in October 1867, while at sea, begins “Read this book carefully, Sammy, & study its precepts well.  In urging this, I am inspired by the hope that you will derive as much satisfaction from its perusal as I have done…” 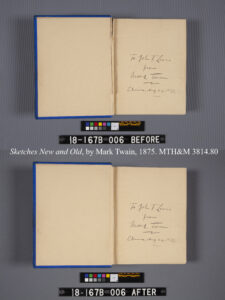 T. Lewis from Mark Twain – Elmira, Aug. 24, 1877.”  John Lewis was an African American tenant farmer on the Elmira, New York property of Clemens in-laws. On August 23, 1877, Lewis rescued members of Clemens’ family who were in a runaway carriage.  Clemens’ wrote of Lewis’ quick-thinking and heroism, “how this miracle was ever accomplished at all, by human strength, generalship & accuracy, is clear beyond my comprehension …I know one thing well: if Lewis had missed his aim he would have been killed on the spot….”  The family lauded Lewis with monetary and other gifts, including a set of Twain’s books, among them this book.

The Museum is grateful for the support of IMLS and the Renée B. Fisher Foundation Fund, which has allowed us to preserve these books, which are irreplaceable pieces of Clemens family history and of our cultural heritage. If you are interested in supporting the restoration of historic objects in the museum’s collections, please contact Director of Development Rosalie Roth at 860-280-3113 or rosalie.roth@marktwainhouse.org.