Welcome to Sam’s Shorts! Each month we bring you a brief passage from one of Mark Twain’s less-familiar works, inviting you to read, reflect, and respond. Then we share what we learned from your responses, answer some of your questions, and tell you a bit more about the background and context of the piece. You can read the current Sam’s Shorts selection here.

Our first Sam’s Shorts selection came from “Adam’s Soliloquy.” Twain wrote the piece in the winter of 1905, but it was not seen by the public until its inclusion in 1923’s Europe and Elsewhere, a collection of published and unpublished materials assembled by his friend and biographer Albert Bigelow Paine after the author’s death.

Many readers were drawn to two distinct themes in the piece. First, as one reader put it, “the connectedness of humankind.”

“The timelessness of the human experience. That everything should boil down to what we share as humans, rather than what we think makes us different. To remember that those who came before us were real people.”

“This made me think about life from cradle to grave–the similarities not only from generation to generation but from youth to senility.”

Readers also appreciated Twain’s description of “the love of a mother for her child” as an example of what connects people across the generations, though one reader had a slightly sardonic take: “Everyone thinks their children are exceptional.” We suspect Twain would have appreciated both readings!

The two lines selected most frequently by readers reflect these two themes.

“She was never able to keep her composure when she came upon a relative; she would try to kiss every one of those people, black and white and all.”

“The same insufficiency of hair, the same absence of teeth, the same feebleness of body and apparent vacancy of mind, the same general unattractiveness all around.”

Readers were particularly taken by the phrase “absence of teeth!”

One reader noted that the piece reminded them of Jaques’ monologue from Act II, Scene 7 of As You Like It, which may be familiar to you from its first lines. The speech begins:

All the world’s a stage,

And all the men and women merely players;

They have their exits and their entrances,

And one man in his time plays many parts,

His acts being seven ages.

After detailing the first six ages of life, Shakespeare closes with the seventh:

Last scene of all,

That ends this strange eventful history,

Is second childishness and mere oblivion,

Where does “Adam’s Soliloquy” fit in Twain’s personal and professional life?

Twain wrote “Adam’s Soliloquy” while living in New York City during a challenging period in his life. His beloved wife Livy and sister Pamela had died the year before, and his relationships with his two surviving children, Clara and Jean, were strained.

The standalone soliloquy was not an uncommon form for him at the time. In January 1905, he had written “The Czar’s Soliloquy” in response to Nicholas II’s actions against striking workers in St. Petersburg. The following month, he wrote both “Adam’s Soliloquy” and “King Leopold’s Soliloquy,” a piece of political satire harshly critical of the Belgian king’s actions in the Congo Free State, over which he claimed personal ownership.

But the subject matter of “Adam’s Soliloquy” was also a common one for Twain. Adam, Eve, and the events and characters of Genesis appear hundreds of times in Twain’s writing. He frequently uses Adam’s status as humankind’s first and only common ancestor and Adam and Eve’s choices in the Garden of Eden to consider human connectedness and moral responsibility.

In 1869’s The Innocents Abroad, for instance, he humorously positions himself weeping at Adam’s supposed tomb: “How touching it was, here in a land of strangers, far away from home, and friends, and all who cared for me, thus to discover the grave of a blood relation.” Twain’s most well-known works on the subject are Extracts from Adam’s Diary, originally published in 1893, and Eve’s Diary, written in the summer of 1905.

Given the subject matter, many readers asked if Twain had read the works of Charles Darwin. He’d actually met Darwin in England in 1879, and mentioned Darwin and his works in his public and private writings. The same year he met Darwin, Twain began his involvement in a somewhat-humorous attempt to build a monument to Adam, because, as he stated in a 1905 essay of the same name, “there seemed to be a likelihood that the world would discard Adam and accept the monkey, and that in the course of time Adam’s very name would be forgotten in the earth . . .”

But what about that dinosaur?

The selection we used came from the beginning of Part II of the piece, with Adam observing humanity in Central Park, and it left off with a tantalizing remark about a dinosaur. The piece itself opens this way:

It is strange . . . very strange. I do not remember this creature. (After gazing long and admiringly.) Well, it is wonderful! The mere skeleton fifty-seven feet long and sixteen feet high! . . . Think of a hundred of them in line, draped in shining cloth of gold!–a majestic thing for a coronation procession. But expensive, for he would eat much; only kings and millionaires could afford him.

I have no recollection of him; neither Eve nor I had heard of him until yesterday. We spoke to Noah about  him; he colored and changed the subject. Being brought back to it–and pressed a little–he confessed that in the matter of stocking the Ark the stipulations had not been carried out with absolute strictness–that is, in  minor details, unessentials. There were some irregularities. He said the boys were to blame for this–the boys mainly, his own fatherly indulgence partly . . . They collected and stowed a good share of the really useful animals; and also, when Noah was not watching, a multitude of useless ones, such as flies, mosquitoes, snakes, and so on, but they did certainly leave ashore a good many creatures which might possibly have had value some time or other, in the course of time. Mainly these were vast saurians a hundred feet long, and monstrous mammals, such as the megatherium and that sort, and there was really some excuse for leaving them behind, for two reasons: (1) it was manifest that some time or other they would be needed as fossils for museums and (2) there had been a miscalculation, the Ark was smaller than it should have been, and so there wasn’t room for these creatures. There was actually fossil material enough all by itself to freight twenty-five Arks like that one . . .  He said he could not blame himself for not knowing about the dinosaur, because it was an American animal, and America had not then been discovered.

Adam is undoubtedly standing in the newly-opened “Hall of Fossil Reptiles” at the American Museum of Natural History in New York, probably gazing upon the first-ever mounted skeleton of a sauropod, the dinosaur the museum referred to at the time as Brontosaurus excelsus. 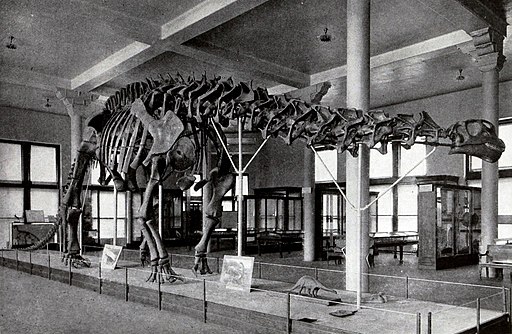 “Brontosaurus” at the American Museum of Natural History. Photo by William Diller Matthew.

Twain’s Adam is confused that he has no memory of this animal–no memory of naming this animal–but he shouldn’t feel too bad. This particular specimen has its own complicated naming history, after all. Read more from AMNH here: “Brontosaurus or Apatosaurus?”

(On the bench in the Park, midafternoon, dreamily noting the drift of the human species back and forth.)

To think—this multitude is but a wee little fraction of the earth’s population! And all blood kin to me, every one! Eve ought to have come with me; this would excite her affectionate heart. She was never able to keep her composure when she came upon a relative; she would try to kiss every one of those people, black and white and all.

How little change one can notice—none at all, in fact, I remember the first child well——Let me see . . . it is three hundred thousand years ago come Tuesday. This one is just like it. So between the first one and the last one there is really nothing to choose. The same insufficiency of hair, the same absence of teeth, the same feebleness of body and apparent vacancy of mind, the same general unattractiveness all around. Yet Eve worshiped that early one, and it was pretty to see her with it. This latest one’s mother worships it; it shows in her eyes—it is the very look that used to shine in Eve’s. To think that so subtle and intangible a thing as a look could flit and flash from face to face down a procession three hundred thousand years long and remain the same, without a shade of change! Yet here it is, lighting this young creature’s face just as it lighted Eve’s in the long ago—the newest thing I have seen in the earth, and the oldest. Of course, the dinosaur——But that is in another class.

Return to the top