Welcome to Sam’s Shorts! Each month we bring you a brief passage from one of Mark Twain’s less-familiar works, inviting you to read, reflect, and respond. Then we share what we learned from your responses, answer some of your questions, and tell you a bit more about the background and context of the piece. You can read the current Sam’s Shorts selection here.

Our fourth Sam’s Shorts selection came from a letter from Sam to his fiancée Olivia “Livy” Langdon. It was written January 14, 1869 while Sam was on lecture tour in Davenport, Iowa and Livy was at her parents’ home in Elmira, New York.

Readers were particularly taken with Clemens’ colorful language in this letter. Many liked his contention that these woman-haters “know about as much of the world as a horse knows about metaphysics,” and several stated that they’d be finding a place in their own vocabularies for “a skull full of oysters.” But beyond the clever insults, many were struck by the end of the passage, where Clemens’ mockery gives way to pity:

When sense dawns upon these creatures, how suddenly they discover that they have been pitiable fools—but they are full forty years old, then, & they sigh to feel that those years & pleasures they might have borne, are wasted, & lost to them for all time.

This is a perfect description of the “incels” of today.

reflective of incel/redpill mentalities today. Obviously particular in its own ways but suggestive of continuities of a specific kind of misogyny as a cultural force. In this sense, talking not about sexism as a structural force, but an active kind of performative misogyny, no?

They have always been with us.

Some readers dug deeper into Clemens’ description of the ways these men believed they were different from and superior to women:

Clemens suggests such men deny their own romanticism: ”They are day-dreamers, & intensely romantic, though they would have the world think otherwise.” Sounds like men (of today) who offer critiques of cultural products (tv, film etc) from a position of faux rationality, positioning themselves as opposed to “feminine” emotional responses.

Nearly every reader wondered what had prompted this outpouring of mockery:

Is he responding to something Livy wrote, or something he has just experienced, or—?

What provoked Twain to “go off” on woman haters?

Did Twain have a particular “unimportant woman hating whelp” in mind when he wrote this?

Most suspected this had something to do with an experience of Livy’s, but wondered whether the term “woman hater” had some broader currency at the time, or whether it was just another one of Sam’s colorful phrases.

What was the context for this? i.e. was “woman hating” in some sense a cultural phenomenon of the time? Was this a commentary on some ongoing issue of public interest, or was it more reflective of a particular observation shared between him and Livy?

Where does this piece fit in Twain’s personal and professional life?

This letter was written mere weeks before Sam and Livy publicly announced their engagement. They’d actually gotten engaged the previous November, pending good character references that the Langdons demanded—and that Sam scrambled to scrape together. But the courtship itself had been much longer, beginning with Sam’s hasty, swiftly-rejected first proposal in the summer of 1868, merely a week after he met Livy. Sam’s comments on “woman-haters” were part of a long epistolary conversation between the two about men, women, their fundamental natures, and how they ought to relate to each other, a conversation that carried on well past their February 1870 marriage.

Sam’s letters during their engagement express the dominant 19th-century white middle-class view of gender: not only that men were naturally rough and crude and women naturally pure and moral, but also that men needed to be reformed by women, and could only be reformed by women. It was important, therefore, that women retain their purity and good morals. If they were to slip from their pedestal, what would happen to men who needed to be reformed and “sivilized”?

In the letter prior to his “woman-haters” comments, Sam begged Livy to allow him to place her on the pedestal he thought she deserved:

Don’t scold me, Livy—let me pay my due homage to your worth; let me honor you above all women; let me love you with a love that knows no doubt, no question—for you are my world, my life, my pride, my all of earth that is worth the having. (January 7, 1869)

Despite—and in fact because of—her elevated moral nature, Sam advised Livy what to read and what not to read, urging her to avoid Don Quixote and Shakespeare until someone had “culled them of their grossness.” Beginning in October 1868, he’d spoken of reading “such an exquisite book” and urged Livy to read it. This was likely Coventry Patmore’s 1854 poem The Angel in the House. Sections of it certainly sound like Sam’s praises of his future wife:

Yet is it now my chosen task

To sing her worth as Maid and Wife;

To live her laureate all my life.

On wings of love uplifted free,

And by her gentleness made great,

I’ll teach how noble man should be

To match with such a lovely mate

Yet Sam urged Livy to read it because he felt it would comfort her anxieties about marriage:

Lacking Livy’s half of the conversation, we are left to speculate on her precise thoughts on these issues at this moment in their relationship, but in addition to Sam’s persistent mentions, she often discussed anxieties about fulfilling this lofty role in letters with other women, both before and after her wedding.

What exactly is a “woman-hater”?

In contrast, the “woman-haters” of Sam’s letters seem to be those men he thinks have rejected the broader cultural view of women that he holds—and then made that hatred their whole personality. But did Sam come up with this term himself, or was it more commonly used?

The term has a long history, but it’s usually one applied to men by others, not one these men adopt themselves. An early English-language example of this is Swetnam the Woman-Hater Arraigned By Women, an anonymous English play published in 1620. This was one of a series of responses to Joseph Swetnam’s anonymously-published 1615 pamphlet The araignment of leuud, idle, froward, and vnconstant women : or the vanitie of them, choose you whether : with a commendation of wise, vertuous and honest women : pleasant for married men, profitable for young men, and hurtfull to none. Swetnam’s title suggests he didn’t propose to hate all women, just any he thought fell short of his expectations. Those who responded to him in print, including many women, didn’t buy the argument. 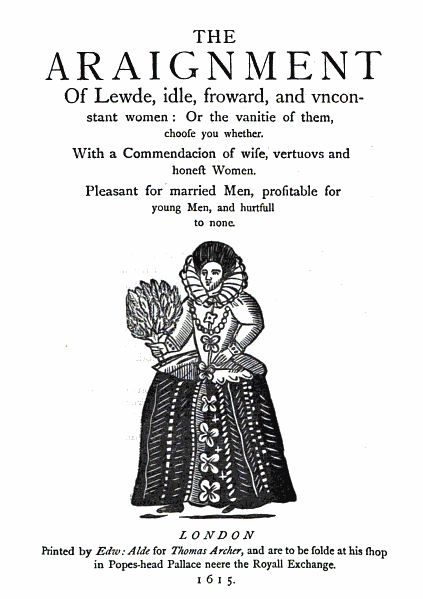 In Sam and Livy’s time, the term was common enough in fiction and non-fiction that we can see a wide range of supposed causes of “woman-hating.” In Sarah Tyler’s 1864 Papers for Thoughtful Girls, woman-haters are “raw boys,” unable to appreciate a fine woman. A character in Harry John Wilmot-Buxton’s 1866 novel The Mysteries of Isis; or, the College Life of Paul Remaine argued that such men didn’t really hate women at all. He saw a different cause for men who adopted this attitude towards women:

I’m sick to death of this humbug of men calling themselves woman haters and setting themselves up as being above all such trifles. It’s only their infernal vanity that makes them do it. Now-a-days if any spoony idiot is refused by a girl he immediately takes up the cry that they’re all alike, all jilts, all false; arriving at this logical conclusion from the fact that one girl has declined the honour of his advances.

Alternately, composer and Spiritualist Carlisle Petersilea suggested in 1892’s The Discovered Country that some woman-haters were “men that led very debauched lives and women had been their entire ruin when on the earth and they had cursed all womankind for their own blind mistakes.” And Elizabeth Ware Packard, in her 1874 work Modern Persecution, Or Married Women’s Liabilities, thought that there was a particular kind of man who should be classed with this group:

A being in the form of a man who will despise a sound argument—a truth—merely because a woman was its medium to him is a being fit only to be despised; and deserves to be ranked among the woman haters of society.

In 1860, Packard had been involuntarily committed to an institution in Illinois on the word of her husband Reverend Theophilus Packard. She was only freed three years later following a trial.

Given all of these definitions of “woman-hater,” which ones do you think Sam was thinking of when he wrote to Livy? A look at Google’s Ngram Viewer, which reveals the frequency of a term’s use over time, suggests it might be worth thinking about this.

I have seen your young gentlemen women-haters often—I know them intimately. They are infallibly & invariably unimportant whelps with vast self-conceit & a skull full of oysters, which they take a harmless satisfaction in regarding as brains. They are day-dreamers, & intensely romantic, though they would have the world think otherwise. Their pet vanity is to be considered “men of the world”—& they generally know about as much of the world as a horse knows about metaphysics. They are powerfully sustained in their woman-hating & kept well up to the mark by the secret chagrin of observing that no woman above mediocrity ever manifests the slightest interest in them—they come without creating a sensation, & go again without anybody seeming to know it. They are coarse, & vulgar, & mean—these people—& they know it. Neither men or women I admire them much or love them—& they know that, also. [in margin: I wish I could see you, Livy.] They thirst  for applause—any poor cheap applause of their “eccentricity” is manna in the desert to them—& they suffer in noticing that the world is stupidly unconscious of them & exasperatingly indifferent to them. When sense dawns upon these creatures, how suddenly they discover that they have been pitiable fools—but they are full forty years old, then, & they sigh to feel that those years & the pleasures they might have borne, are wasted, & lost to them for all time. I do pity a woman-hater with all my heart. The spleen he suffers is beyond comprehension.

This and other Clemens letters quoted can be found in the University of California’s Mark Twain Project Online.

Return to the top