From Twain to Today:

How the Mark Twain House & Museum Came to Be

After Sam and Olivia Clemens sold their remarkable mansion to the Richard Bissell family in 1903, it changed owners several times.

The Bissells lived in the house until 1917. For the next four years, they rented the building to the Kingswood School for boys. In 1922, the house was sold to a developer who immediately made plans to turn the house into an apartment building. According to a 1923 Hartford Courant article, “the apartments will be ready for occupancy on July 1. There will be eleven apartments and in the basement there is to be a large dining hall to be used for commercial purposes or for functions arranged by the tenants. Each apartment will have a large room with a fireplace and there will be three small bedrooms with folding beds ingeniously worked into the panels of the doors.”

The Friends of Hartford, led by Katherine Seymour Day, purchased the house in 1929. In April of that year, a group called The Mark Twain Memorial and Library Commission was chartered, with the purpose of saving and restoring Mark Twain’s House on Farmington Avenue. From 1930 until 1956, the organization rented out the first floor to The Mark Twain Branch of the Hartford Public Library. 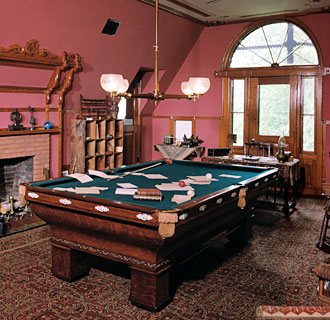 The remainder of the house was rented as private apartments through the 1960s. Formal restoration of the house began in 1963, the same year the Mark Twain House was designated a National Historic Landmark.

The work began with the Billiard Room. Research, physical investigation and restoration of the rest of the house continued, and all the major rooms of the home were opened in time for the celebration of the 100th anniversary of the house in 1974.

In 1999 the museum began a capital campaign that led to the opening of the museum center in 2003, by which time the organization had been renamed The Mark Twain House & Museum. The new structure, strategically located and nestled in a hillside not to detract from the Mark Twain House, was designed by Robert A. M. Stern and was the first LEED-certified “green” museum in the United States.

The following years included a significant interior restoration in 2004-05, including the restoration of the kitchen and Servants’ Wing.

The 2010 Centennial of Mark Twain’s death was an occasion for a revival of activities in the house and museum and during that summer, as average museum attendance declined in the region, attendance at the Mark Twain House & Museum reached record levels.