The Grounds of The Mark Twain House

In New England, tulips bloom in the spring and roses bloom in the summer, right? But even in a small area like the museum grounds, the same flowers can bloom at different times because they are in different “microclimates”—areas that may get less sun, or more protection from spring frosts, or even warmth from our buildings!

You can be a citizen scientist and use your observational skills to help us discover the microclimates here at the museum when you’re visiting—all you need is your phone! The links below will take you to scavenger hunts for various gardens on the museum grounds. When you’re visiting the museum, click on the garden you’re observing and then check off all of the flowers you see blooming in that garden. When you’re done, hit “Submit,” and follow the link provided to learn about the plants in that garden, how Gilded Age gardeners used them, and how our talented gardeners use them today.

The Turn-around and Carriage House Gardens

Completed in 1874, the Carriage House – often called “the barn” or “the stable” by the Clemens family — was designed by architects Edward Tuckerman Potter and Alfred H. Thorp as a companion structure to the house. “Its massive size and its generous accommodations” — for coachman Patrick McAleer and his family, who lived there from 1874 to 1903 — “mark this structure as an unusual carriage house among those intended for a single family’s use,” according to the Library of Congress’s Historic American Buildings Survey.

“The building has the wide overhanging eaves and half-timbering typical of the Chalet style popular in the late 19th century for cottages, carriage houses, and gatehouses,” says the Buildings Survey. From under one eave on the north side of the roof, a carved wooden griffin glares out.

For the Clemens girls, the barn was a place of wonder, and McAleer its presiding spirit. “They conferred their society freely upon him in the stable, and he protected them while they took risks in petting the horses in the stalls and in riding the reluctant calves,” Samuel Clemens wrote. McAleer also “allowed them, mornings, to help him drive the ducks down to the stream which lazily flowed through the grounds, and back to the stable at sunset.”

Clemens himself set up a study in the hayloft in the spring of 1875. His friend William Dean Howells said that “he took the room above his stable, which had been intended for his coachman. There we used to talk together, when we were not walking and talking together, until he discovered that he could make a more commodious use of the billiard-room at the top of his house.” This hayloft study was possibly in one of the two second-floor rooms with access to a balcony at the south end of the building, now facing the modern Visitors Center, says the Buildings Survey. 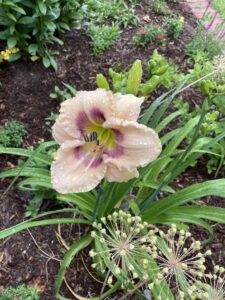 Back in the 1980s and 1990s, a hybridizer, then from Long Island, named Patrick Stamile was striving to create some daylily hybrids with bold-colored eyezones.  Technically, he took a well-known red-eyed diploid daylily and converted it to a tetraploid, and with that he hybridized a series of daylilies with eyezones, all descended from that ‘Virginia Henson’ conversion, all between 4” and 5” in diameter, and all (at first) carrying a fruit or food as a first name, and ‘Candy’ as the second name.  ‘Strawberry Candy’ and ‘Custard Candy’ would rise up the award pyramid and win the coveted Stout medal.  Within a few years many daylily collectors developed ‘Candy Bed’ Gardens.

In 1997, The Mark Twain House & Museum’s Retail Director at the time, Gary Jones, had the opportunity to meet Patrick Stamile at a daylily convention.  Jones mentioned he was Retail Director at The Mark Twain House, and perhaps, should he have a promising seedling with a ‘near blue’ eyezone, he might consider the name ‘Huckleberry Candy,’  He responded with a look positive to the suggestion, and wrote it in his notebook.  That winter when the eagerly awaited 1998 Stamile catalog arrived, there was ‘Huckleberry Candy.’  This daylily would win an Honorable Mention Award.

Our Huckleberry Candy can be found in the garden outside The Carriage House.