A BEGINNER’S GUIDE TO AMERICA: Roya Hakakian in conversation

The Mark Twain House & Museum is delighted to welcome author and Persian poet Roya Hakakian as she discusses her new book on immigration, A Beginner’s Guide to America: For the Immigrant and the Curious, with former Connecticut U.S. Congressman Sam Gejdenson and author Jeanne Zulick Ferruolo. 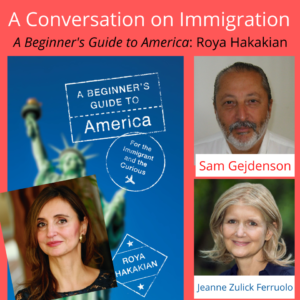 Into the maelstrom of unprecedented contemporary debates about immigrants in the United States, this perfectly timed book gives us a portrait of what the new immigrant experience in America is really like. Written as a “guide” for the newly arrived, and providing “practical information and advice,” Roya Hakakian, an immigrant herself, reveals what those who settle here love about the country, what they miss about their homes, the cruelty of some Americans, and the unceasing generosity of others. She captures the texture of life in a new place in all its complexity, laying bare both its beauty and its darkness as she discusses race, sex, love, death, consumerism, and what it is like to be from a country that is in America’s crosshairs. Her tenderly perceptive and surprisingly humorous account invites us to see ourselves as we appear to others, making it possible for us to rediscover our many American gifts through the perspective of the outsider. In shattering myths and embracing painful contradictions that are unique to this place, A Beginner’s Guide to America is Hakakian’s candid love letter to America.This virtual program is FREE to attend, though when you register, we hope you’ll consider contributing what you’d call a fair ticket price. We thank you for your attendance whether you’re able to donate or not. REGISTER HERE!

Signed copies of A Beginner’s Guide to America will be available for purchase through the Mark Twain Store. Proceeds benefit The Mark Twain House & Museum. We regret that we cannot ship outside of the U.S. at this time.

———–ROYA HAKAKIAN is an author and Persian poet whose opinion columns, essays and book reviews appear in English language publications like the New York Times, the Daily Beast, Newsweek, the Wall Street Journal and NPR’s All Things Considered. A founding member of the Iran Human Rights Documentation Center, she has collaborated on over a dozen hours of programming for leading journalism units on network television, including CBS 60 Minutes. Roya is the author of two collections of poetry in Persian, and is listed among the leading new voices in Persian poetry in the Oxford Encyclopedia of the Modern Islamic World. Her poetry has appeared in numerous anthologies around the world, including La Regle Du Jeu, Strange Times My Dear: The Pen Anthology of Contemporary Iranian Literature. She serves on the board of Refugees International.SAM GEJDENSON was born in a displaced persons camp in Eschwege, Allied-occupied Germany. He was the child of a Belarusian father and Lithuanian mother. Gejdenson grew up in Bozrah, CT on a dairy farm. He attended Mitchell College for two years and finished his studies at the University of Connecticut. From 1970 to 1973, he worked for the FIA Company. He was elected as a Democrat to the Connecticut House of Representatives that same year and served two terms. Gejdenson won a seat in the United States House of Representatives in November 1980. Gejdenson served as Chairman of the Subcommittee on Oversight and Investigations of the House Interior Committee (now House Resources Committee). In that capacity, he conducted oversight over the Nuclear Regulatory Commission and the Bureau of Indian Affairs. Beginning in 1989, Gejdenson assumed the Chairmanship of the Subcommittee on International Economic Policy and Trade of the House Foreign Affairs Committee (now International Relations Committee). In 1999, Gejdenson became the Ranking Democratic Member of the full International Relations Committee, where he was a key player in writing legislation cracking down on international human trafficking and to authorize the activities of State Department. Gejdenson now resides in Bozrah, CT and is now involved in international trade with his own company, Sam Gejdenson International.. Gejdenson is on the Board of Directors of the National Democratic Institute and was a Commissioner on the United States Commission on International Religious Freedom from 2012-2014. Mr. Gejdenson has been a director of Phibro an international agriculture science company since January 2004 and is a member of our Audit Committee and our Compensation Committee. Mr. Gejdenson is the Chairman of our Compensation Committee.  JEANNE ZULICK FERRUOLO writes children’s books for Farrar Straus Giroux Books for Young Readers, an imprint of Macmillan. Her novels have earned starred reviews. Ruby in the Sky (2019) was a finalist for the Connecticut Book Award, and the Boston Authors Club Julia Ward Howe Award, as well as a Junior Library Guild Gold Selection. Other novels include, A Galaxy of Sea Stars (2020), and Each of Us a Universe which releases February 1, 2022.A granddaughter of immigrants, Jeanne continues to be inspired by the resilience and strength of refugees—a theme she explores in her stories. Jeanne has worked as a legislative assistant in the U.S. House of Representatives, an attorney with the Connecticut Division of Public Defender Services, and an English teacher in Slovakia. She volunteers with IRIS-Integrated Refugee & Immigrant Services (IRISCT.org) in New Haven, Connecticut and lives in Ellington, Connecticut with her family. You can find Jeanne at jzulferr.com.