A BILLION YEARS: MY ESCAPE FROM SCIENTOLOGY with Mike Rinder and Tony Ortega (Virtual) 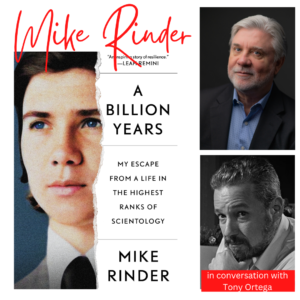 Emmy Award-winner Mike Rinder, one of the highest-ranking defectors from Scientology and co-host of Scientology: The Aftermath with Leah Remini, discusses the secret inner workings of the powerful organization with journalist and Scientology critic Tony Ortega (The Village Voice, The Underground Bunker)Mike Rinder’s parents began taking him to their local Scientology center when he was five years old. After high school, he signed a billion-year contract and was admitted into Scientology’s elite inner circle, the Sea Organization working directly with founder L. Ron Hubbard. In the 1980s, Rinder became Scientology’s international spokesperson and the head of its powerful Office of Special Affairs. He helped negotiate Scientology’s pivotal tax exemption from the IRS and engaged with the organization’s prominent celebrity members, including Tom Cruise, Lisa Marie Presley, and John Travolta. Yet Rinder couldn’t shake a nagging feeling that something was amiss—Hubbard’s promises remained unfulfilled at his death, and his successor, David Miscavige, was a ruthless and vindictive man who did not hesitate to confine many top Scientologists, Mike among them, to a makeshift prison. In 2007, at the age of fifty-two, Rinder finally escaped Scientology. Overnight, he became one of the organization’s biggest public enemies. He was followed, hacked, spied on, and tracked. But he refused to be intimidated and today helps people break free of Scientology.

Copies of A BILLION YEARS are available for purchase through the Mark Twain Store; proceeds benefit The Mark Twain House & Museum. Books will be shipped after the event. We regret that we are NOT able to ship books outside the United States as it is cost-prohibitive to do so.

ABOUT THE AUTHOR: Mike Rinder was raised as a Scientologist from early childhood. He went on to serve as Scientology’s international spokesperson and as the head of its Office of Special Affairs and was a member of the Board of Directors of Church of Scientology International from its creation in 1983 until he left in 2007. Since renouncing Scientology, Rinder has become a prominent whistleblower against its abuses. He appeared in the HBO documentary Going Clear and cohosted all three seasons of the Emmy Award–winning show Leah Remini: Scientology and the Aftermath on A&E. He and Remini currently cohost the podcast Scientology: Fair Game.
ABOUT THE MODERATOR: Tony Ortega is a journalist who was formerly the editor of The Village Voice. He has written about Scientology since 1995, and his book The Unbreakable Miss Lovely about Scientology’s most infamous campaign of terror — to destroy author Paulette Cooper — came out in May 2015. He continues to monitor breaking developments around the world from an undisclosed location in an underground bunker he shares with four cats and one of them wrinkly Shar Pei dogs.
————
Programs at The Mark Twain House & Museum are made possible in part by support from CT Humanities; the Connecticut Department of Economic and Community Development, Office of the Arts; Ensworth Charitable Foundation, Bank of America, N.A., Trustee; the Greater Hartford Arts Council’s United Arts Campaign; The Hartford; The Mark Twain Foundation; The National Endowment for the Humanities; and Travelers.