A CAT’S TALE: Paul Koudounaris On The History of Cats in America 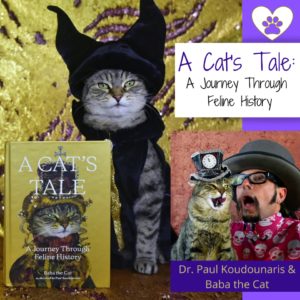 The Mark Twain House & Museum is delighted to welcome fellow feline enthusiast, historian, and author Paul Koudounaris – a man who might just love cats as much as Mark Twain did.

Paul will discuss the history of America’s felines and their oft neglected contributions. Presented with a slideshow of historical images, the talk will take the audience on a wild and harrowing journey to reclaim the prodigious achievements of some of our nation’s greatest cats. Learn about cats in wartime and their role in the Wild West. Hear the extraordinary stories of cats like Clementine Jones, who traveled 1600 miles to find her family in a home and city she had never before been in. Or Pooli, a World War II US Navy cat who is the most decorated military animal in American history. Or Kiddo the flying cat, the world’s first celebrity feline. Or the amazing Colonel, the greatest (and highest ranking!) cat in US Army history.

All this and more in this FREE virtual event. REGISTER HERE.

Copies of A Cat’s Tale signed by the author are available for purchase through the Mark Twain Store; proceeds benefit The Mark Twain House & Museum. Books will be shipped after the event. We regret that we are NOT able to ship books outside the United States as it is cost-prohibitive to do so.

Dr. Paul Koudounaris is an author and photographer who holds a PhD in Art History. He has written three award winning books on the visual culture of death, and is also a feline scholar who has lectured in Europe, the United States, and Australia on the history of cats. His book, A Cat’s Tale, written in the voice of his rescue cat Baba, presents feline history from a feline point of view. Baba is also an internationally known feline cosplay model who has appeared in newspapers and magazines throughout the world, and models the looks of the historical periods and famous characters she narrates in the book.