A FIRE IN THE WILDERNESS: John Reeves in conversation with Steve Courtney 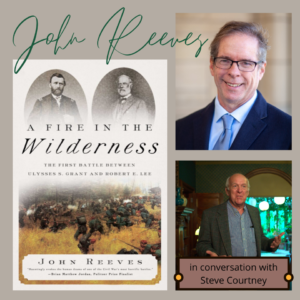 A Fire in the Wilderness is the riveting account of the first bloody showdown between Ulysses S. Grant and Robert E. Lee—a battle that sealed the fate of the Confederacy and changed the course of American history. In the spring of 1864, President Lincoln feared that he might not be able to save the Union. The Army of the Potomac had performed poorly over the previous two years, and many Northerners were understandably critical of the war effort. Lincoln assumed he’d lose the November election, and he firmly believed a Democratic successor would seek peace immediately, spelling an end to the Union. A Fire in the Wilderness tells the story of that perilous time when the future of the United States depended on the Union Army’s success in a desolate forest roughly sixty-five miles from the nation’s capital.At the outset of the Battle of the Wilderness, General Lee’s Army of Northern Virginia remained capable of defeating the Army of the Potomac. But two days of relentless fighting in dense Virginia woods, Robert E. Lee was never again able to launch offensive operations against Grant’s army. Lee, who faced tremendous difficulties replacing fallen soldiers, lost 11,125 men—or 17% of his entire force. On the opposing side, the Union suffered 17,666 casualties.The alarming casualties do not begin to convey the horror of this battle, one of the most gruesome in American history. When the fighting finally subsided during the late evening of the second day, the usually stoical Grant threw himself down on his cot and cried.

Signed copies of A Fire in the Wilderness will be available for purchase through the Mark Twain Store; proceeds benefit The Mark Twain House & Museum. Books will be shipped after the event. We regret that we are NOT able to ship books outside the United States as it is cost-prohibitive to do so.

John Reeves has been a teacher, editor, and writer for over twenty-five years. The Civil War, in particular, has been his passion since he first read Bruce Catton’s The American Heritage Picture History of the Civil War as an elementary school student in the 1960s. Recently, John’s articles on Robert E. Lee have been featured in The Washington Post and on the History News Network. Earlier in his career, he taught European and American history at various colleges in Chicago, the Bronx, and London. He graduated Phi Beta Kappa with a BA in Economics from Syracuse University in 1984. Later, he received an MA in European History from the University of Massachusetts at Amherst, and pursued a PhD in History at the University of Illinois at Chicago. His dissertation was on Britain’s role in Persia in the late 19th and early 20th centuries. Throughout his career, Reeves has tried to make history lively and accessible for ordinary readers and students. Over the years, he has taught European and American history at Lehman College, Bronx Community College, and Southbank University in London.
Steve Courtney is the author of Joseph Hopkins Twichell: The Life and Times of Mark Twain’s Closest Friend (Georgia, 2008), winner of the Connecticut Book Award; ‘The Loveliest Home That Ever Was’: The Story of the Mark Twain House in Hartford (Dover, 2011); and Mark Twain’s Hartford (Arcadia, 2016), among other works. He is co-editor, with Peter Messent and Harold K. Bush, of The Mark Twain-Joseph Hopkins Twichell Letters (Georgia, 2017, paperback edition published 2020). He has been a journalist for forty years, much of that time at The Hartford Courant, and has served as both publicist and curatorial project coordinator at The Mark Twain House & Museum in Hartford, Connecticut.
+ Google Calendar+ iCal Export