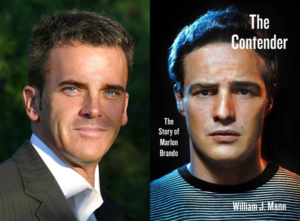 William Mann will discuss The Contender: The Story of Marlon Brando, his new biography of Marlon Brando, with arts writer Frank Rizzo in the A Little Harmless Fun series at The Mark Twain House & Museum on Tuesday, October 22, at 7 p.m.

Based on new and revelatory material from Brando’s own private archives, William Mann presents a deeply-textured, ambitious, and definitive portrait of the greatest movie actor of the twentieth century, the elusive Marlon Brando, bringing his extraordinarily complex life into view as never before. Mann has written biographies of Katharine Hepburn, Barbra Streisand, and Elizabeth Taylor; won the 2015 Edgar Allan Poe Award for his crime book Tinseltown: Murder, Morphine, and Madness at the Dawn of Hollywood; and was co-publisher of Metroline, a gay-lesbian news magazine in Hartford. He is the director of the LGBT Center and a full-time faculty member of the history department at Central Connecticut State University.

Frank Rizzo has covered theater for four decades for The Hartford Courant, Variety, and The New York Times.  Read his work on his website Showriz.

Copies of The Contender: The Story of Marlon Brando will be available for purchase and signing following the conversation.