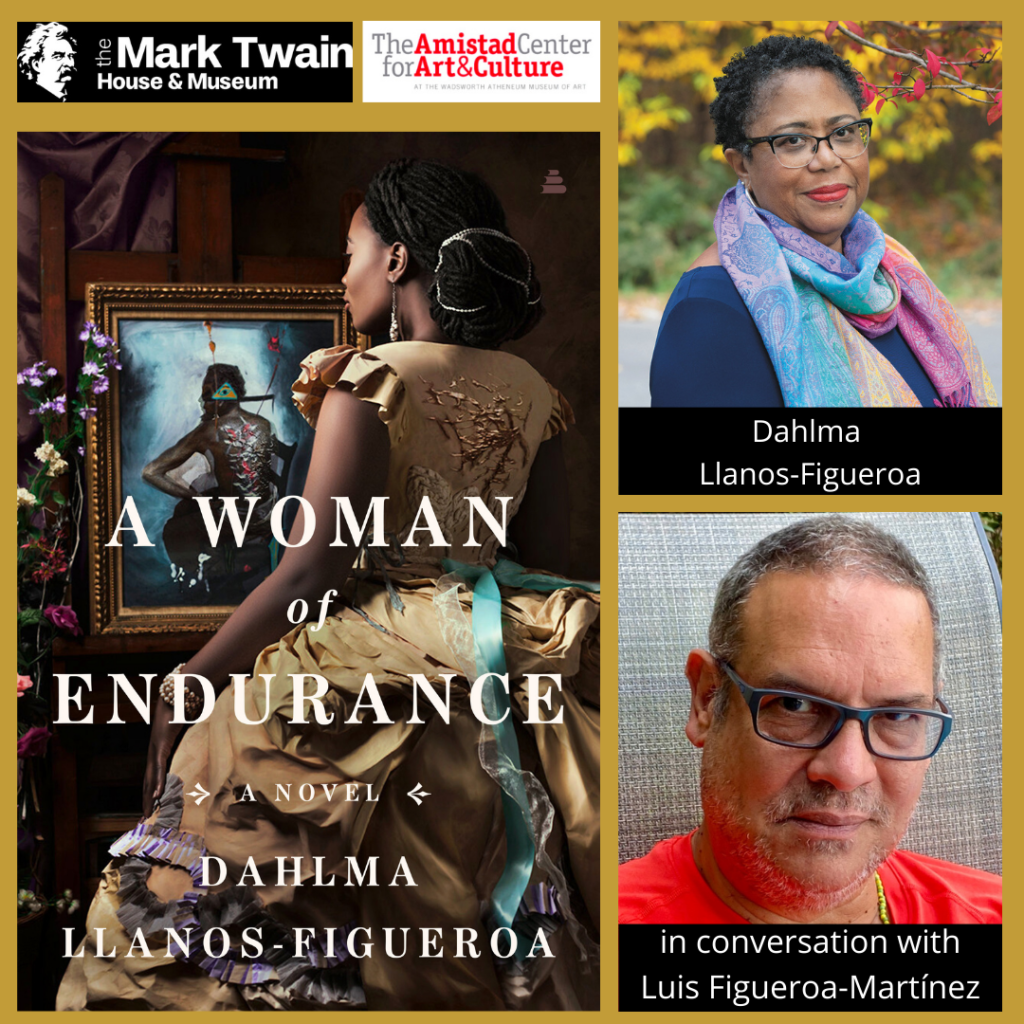 The Mark Twain House & Museum and the Amistad Center for Art & Culture present a discussion on this moving new novel with author Dahlma Llanos-Figueroa and Trinity College Professor Luis Figueroa-Martínez.

Combining the haunting power of Toni Morrison’s Beloved with the evocative atmosphere of Phillippa Gregory’s A Respectable Trade, Dahlma Llanos-Figueroa’s groundbreaking novel illuminates a little discussed aspect of history—the Puerto Rican Atlantic Slave Trade—witnessed through the experiences of Pola, an African captive used as a breeder to bear more slaves.

A Woman of Endurance, set in nineteenth-century Puerto Rican plantation society, follows Pola, a deeply spiritual African woman who is captured and later sold for the purpose of breeding future slaves. The resulting babies are taken from her as soon as they are born. Pola loses the faith that has guided her and becomes embittered and defensive. The dehumanizing violence of her life almost destroys her. But this is not a novel of defeat but rather one of survival, regeneration, and reclamation of common humanity.

Readers are invited to join Pola in her journey to healing. From the sadistic barbarity of her first experiences, she moves on to receive compassion and support from a revitalizing new community. Along the way, she learns to recognize and embrace the many faces of love—a mother’s love, a daughter’s love, a sister’s love, a love of community, and the self-love that she must recover before she can offer herself to another. It is ultimately, a novel of the triumph of the human spirit even under the most brutal of conditions.

Copies of A WOMAN OF ENDURANCE signed by the author are available for purchase through the Mark Twain Store; proceeds benefit The Mark Twain House & Museum. Books will be shipped after the event. We regret that we are NOT able to ship books outside the United States as it is cost-prohibitive to do so.

Dahlma Llanos-Figueroa was born in Puerto Rico and raised in New York City. She is a product of the Puerto Rican communities on the island and in the South Bronx. She attended the New York City public school system and received her academic degrees from SUNY at Buffalo and CUNY Queens College. As a child she was sent to live with her grandparents in Puerto Rico where she was introduced to the culture of rural Puerto Rico, including the storytelling that came naturally to the women in her family, especially the older women. Much of her work is based on her experiences during this time.

The hardcover edition of Daughters of the Stone was shortlisted as a 2010 Finalist for the PEN/Robert W. Bingham Prize. In 2020, the self-published paperback edition won the 16th Annual National Indie Excellence® Awards for Multicultural Fiction. Dahlma was one of the awardees of the 2021 NYSCA/NYFA Artist Fellow in Fiction, the 2021 City Artists Corps grant awards, and the 2021 Letras Boricuas Fellowship/Mellon Foundation Award. Dahlma’s short stories have appeared in various anthologies and literary journals throughout the United States, Africa, and Brazil. The English and Spanish language editions of Dahlma’s second novel, A Woman of Endurance, was released in April 2022.

Luis Figueroa-Martínez is an Associate Professor in Trinity College’s History Department where he has been teaching Caribbean, Latin American, and U.S. Latina\Latino History since 1996. He is the author of Sugar, Slavery and Freedom in Nineteenth-Century Puerto Rico ( University of North Carolina Press, 2006), which won a nonfiction book award from the Puerto Rico Chapter of PEN International, the island’s equivalent of the UK’s English PEN Hessell-Tiltman Prize for historical nonfiction works.

His documentary filmmaking works include serving as a historical consultant and\or co-producer on two CPTV films on Puerto Ricans: Puerto Rican Passages (1995), on migration to Connecticut, and Ritmo de Pueblo\Rhythm of the People (2001), on music culture, colonialism and national\ethnic\racial identities; historian and producer Rockefeller & Kellogg foundations-funded doc film race, poverty, and politics in Hartford during the late 1960s-era of urban uprisings.

Figueroa-Martínez has also produced, directed and edited two “direct–cinema” documentary films on racism, homophobia and sexism at Trinity College: Beyond the Surface: An Umoja House Conversation (2003), and More Than Just a Halloween Affair on Vernon Street and Facebook (2006). More recently, he has resumed work on a combined book and three-part documentary film focusing on urban planning, racial gentrification, and colonial modernity in San Juan, Puerto Rico, since the 1930s.