Noted toy expert Christopher Byrne will speak about classic toys from the past  — and the hot new toys for this holiday season! 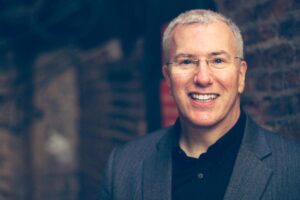 The casual, free-wheeling conversation series will be held online this fall via Crowdcast and will once again be led by Frank Rizzo, New York theater critic for Variety and writer for Connecticut Magazine, The New York Times, Hartford Magazine, and other publications.

Byrne is a 30-year-plus veteran of the toy industry, having written seven books about toys and play, including Toy Time: A Look Back at the Most Beloved Toys of the 1950s to the 1980s and the textbook An Introduction to The U.S. Toy Industry: Serious Fun, which is used in undergraduate and graduate business programs.

He is a regular guest on Live with Kelly and Ryan and is the co-host of The Playground Podcast. He is also a consultant on entertainment and licensing (animated and live action) and speaks extensively on the role and benefits of play in child development. His book Funny Business, Harnessing the Power of Play to Give Your Business a Competitive Advantage has been used in a variety of industries to foster innovation.

Tickets for this event are $10. Register Here!

A Little Harmless Fun will continue on November 12 with author Joyce Maynard; and, on December 8, the 40th anniversary of John Lennon’s death, a commemoration of the vigil outside The Dakota marking his life and our loss, featuring photojournalist James Meehan, longtime Beatles expert Charles Rosenay, and former Hartford Courant music writers Roger Catlin and Steve Metcalf.

Programs at The Mark Twain House & Museum are made possible in part by support from the Connecticut Department of Economic and Community Development, Office of the Arts, and the Greater Hartford Arts Council’s United Arts Campaign and its Travelers Arts Impact Grant program with major support from The Travelers Foundation.