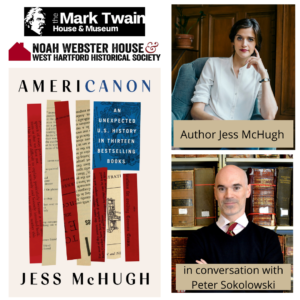 Surprising and delightfully engrossing, Americanon explores the true history of thirteen of the nation’s most popular books. Overlooked for centuries, our simple dictionaries, spellers, almanacs, and how-to manuals are the unexamined touchstones for American cultures and customs. These books sold tens of millions of copies and set out specific archetypes for the ideal American, from the self-made entrepreneur to the humble farmer.  Benjamin Franklin’s Autobiography, How to Win Friends and Influence People, Webster’s Dictionary, Emily Post’s Etiquette: Americanon looks at how these ubiquitous books have updated and reemphasized potent American ideals—about meritocracy, patriotism, or individualism—at crucial moments in history. Old favorites like the Old Farmer’s Almanac and Betty Crocker’s Picture Cook Book are seen in this new way—not just as popular books but as foundational texts that shaped our understanding of the American story.Taken together, these books help us understand how their authors, most of them part of a powerful minority, attempted to construct meaning for the majority. Their beliefs and quirks—as well as personal interests, prejudices, and often strange personalities—informed the values and habits of millions of Americans, woven into our cultural DNA over generations of reading and dog-earing. Yet their influence remains uninvestigated. Until now. What better way to understand a people than to look at the books they consumed most, the ones they returned to repeatedly, with questions about everything from spelling to social mobility to sex? This fresh and engaging book is American history as you’ve never encountered it before.
FREE virtual program, with donations gratefully accepted and split evenly between Noah Webster House & West Hartford Historical Society and The Mark Twain House & Museum. REGISTER HERE.
Signed copies of AMERICANON are available for purchase via the Mark Twain Store. Books will be shipped after the event. We regret that we are NOT able to ship books outside the United States as it is cost-prohibitive to do so.
———————

Jess McHugh is a writer and researcher whose work has appeared across a variety of national and international publications, including The New York Times, The Wall Street Journal, The Washington Post, The Nation, TIME, The Paris Review, The Guardian, The New Republic, New York Magazine‘s The Cut, Fortune, Village Voice, The Believer, and Lapham’s Quarterly, among others. She has reported stories from four continents on a range of cultural and historical topics, from present-day Liverpool punks to the history of 1960s activists in Greenwich Village.