ANCESTOR TROUBLE: A Reckoning and a Reconciliation 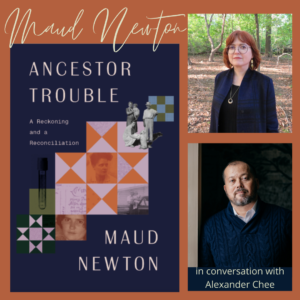 The Mark Twain House & Museum welcomes Maud Newton in conversation with Alexander Chee to discuss her new book ANCESTOR TROUBLE: A RECKONING AND A RECONCILIATION a searching, moving, and inspiring attempt to use genealogy—a once-niche hobby that has grown into a multi-billion-dollar industry—to expose the secrets and contradictions of her own ancestors, and to argue for the transformational possibilities that reckoning with our ancestors offers all of us.

Maud Newton’s ancestors have vexed and fascinated her since she was a girl. Her mother’s father, who came of age in Texas during the Great Depression, was said to have married thirteen times and been shot by one of his wives. Her mother’s grandfather killed a man with a hay hook and died in an institution. Mental illness and religious fanaticism percolated through Maud’s maternal lines back to an ancestor accused of being a witch in Puritan-era Massachusetts. Maud’s father, an aerospace engineer turned lawyer, was an educated man who extolled the virtues of slavery and obsessed over the “purity” of his family bloodline, which he traced back to the Revolutionary War. He tried in vain to control Maud’s mother, a whirlwind of charisma and passion given to feverish projects: thirty rescue cats, and a church in the family’s living room where she performed exorcisms.

Their divorce, when it came, was a relief. Still, the meeting of her parents’ lines in Maud inspired an anxiety that she could not shake, a fear that she would replicate their damage. She saw similar anxieties in the lives of friends, in the works of writers and artists she admired. As obsessive in her own way as her parents, Maud researched her genealogy—her grandfather’s marriages, the accused witch, her ancestors’ roles in slavery and genocide—and sought family secrets through her DNA. But immersed in census archives and cousin matches, she yearned for deeper truths. Her journey took her into the realms of genetics, epigenetics, and the debates over intergenerational trauma. She mulled over modernity’s dismissal of ancestors along with psychoanalytic and spiritual traditions that center them.

Copies of ANCESTOR TROUBLE signed by the author are available for purchase through the Mark Twain Store; proceeds benefit The Mark Twain House & Museum. Books will be shipped after the event. We regret that we are NOT able to ship books outside the United States as it is cost-prohibitive to do so.

Maud has written personal essays, cultural criticism, and fiction. Her essay on “America’s Ancestry Craze,” a seed of the book, was a Harper’s cover story. Both the book and the essay are outgrowths of old weekend ancestry posts on her blog.

Maud has written personal essays, cultural criticism, and fiction. Beyond Harper’s, her work has appeared in the New York Times Magazine, Narrative, the New York Times Book Review, Granta, Bookforum, the Oxford American, Humanities, the Los Angeles Times, the Boston Globe, the Paris Review Daily, the New Republic, the Awl, Longreads, Tin House, and many other publications and anthologies, including the New York Times Bestseller, What My Mother Gave Me.

Maud received the Narrative Prize for “When the Flock Changed,” a work of fiction. Her personal essay, “Conversations You Have at Twenty,” was anthologized in Love is a Four-Letter Word. She was awarded City College’s Irwin and Alice Stark Short Fiction Prize for “Regarding the Insurance Defense Attorney.” Her fiction and essays have been praised by Kirkus, Publisher’s Weekly, the New Yorker online, Elle, the New York Times, the Paris Review online, and others.

Alexander Chee is the bestselling author of the novels Edinburgh and The Queen of the Night, and the essay collection How To Write An Autobiographical Novel, all from Houghton Mifflin Harcourt. A contributing editor at The New Republic, and an editor at large at VQR, his essays and stories have appeared in The New York Times Magazine, T Magazine, The Sewaneee Review, and the 2016 and 2019 Best American Essays.

He is a 2021 United States Artists Fellow, a 2021 Guggenheim Fellow in Nonfiction, and the recipient of a Whiting Award, a NEA Fellowship, an MCCA Fellowship, the Randy Shilts Prize in gay nonfiction, the Paul Engle Prize, the Lambda Editor’s Choice Prize, and residency fellowships from the MacDowell Colony, the VCCA, Leidig House, Civitella Ranieri and Amtrak.

He teaches as an associate professor of English and Creative Writing at Dartmouth College.