Ann Leary Live and In-Person with Denis Leary on THE FOUNDLING: A NOVEL 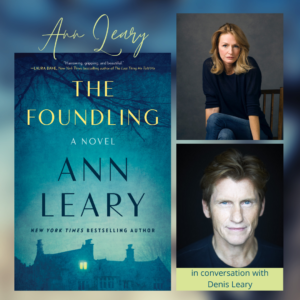 This event will be held at IMMANUEL CONGREGATIONAL CHURCH across the street from The Mark Twain House & Museum.

The Mark Twain House & Museum welcomes Ann Leary to discuss her new book THE FOUNDLING: A NOVEL with her husband and five-time Emmy nominee Denis Leary. Join us to explore the story of two friends, raised in the same orphanage, whose loyalty is put to the ultimate test when they meet years later at a controversial institution—one as an employee; the other, an inmate.

It’s 1927 and eighteen-year-old Mary Engle is hired to work as a secretary at a remote but scenic institution for mentally disabled women called the Nettleton State Village for Feebleminded Women of Childbearing Age. She’s immediately in awe of her employer—brilliant, genteel Dr. Agnes Vogel.

Dr. Vogel had been the only woman in her class in medical school. As a young psychiatrist, she was an outspoken crusader for women’s suffrage. Now, at age forty, Dr. Vogel runs one of the largest and most self-sufficient public asylums for women in the country. Mary deeply admires how dedicated the doctor is to the poor and vulnerable women under her care.

Soon after she’s hired, Mary learns that a girl from her childhood orphanage is one of the inmates. Mary remembers Lillian as a beautiful free spirit with a sometimes-tempestuous side. Could she be mentally disabled? When Lillian begs Mary to help her escape, alleging the asylum is not what it seems, Mary is faced with a terrible choice. Should she trust her troubled friend with whom she shares a dark childhood secret? Mary’s decision triggers a hair-raising sequence of events with life-altering consequences for all.

Inspired by a true story about the author’s grandmother, The Foundling offers a rare look at a shocking chapter of American history. This gripping page-turner will have readers on the edge of their seats right up to the stunning last page…asking themselves, “Did this really happen here?”

Tickets are $35 and include a signed copy of THE FOUNDLING. $30 for Museum members. We expect this event to sell out, so register today by clicking HERE!

Ann Leary is the New York Times bestselling author of a memoir and four novels including THE GOOD HOUSE (soon to be a major motion picture starring Sigourney Weaver and Kevin Kline). Her work has been translated into eighteen languages, and she has written for The New York Times, Ploughshares, NPR, Redbook, and Real Simple, among other publications. Her essay, “Rallying to Keep the Game Alive,” was adapted for Amazon’s television series, MODERN LOVE (starring Tina Fey and John Slattery).

Denis Leary is a five-time loser at the Emmy Awards. And the Golden Globes. He hopes to one day also lose an Oscar, a Grammy, and a Tony. In his long and storied entertainment career, Leary has also never won The Stanley Cup, The Nobel Peace Prize or an argument with his wife. He looks forward to playing Kellyanne Conway in the President Trump biopic.