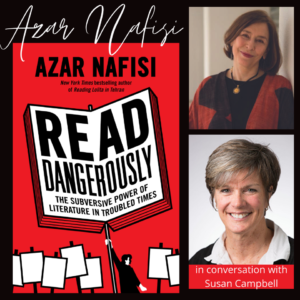 The author of Reading Lolita in Tehran and Republic of Imagination returns with a guide to the power of literature in turbulent times, arming readers with a resistance reading list, ranging from James Baldwin to Zora Neale Hurston to Margaret Atwood. Pulitzer Prize-winning journalist Susan Campbell joins Dr. Nafisi in conversation.

What is the role of literature in an era when one political party wages continual war on writers and the press? What is the connection between political strife in our daily lives, and the way we meet our enemies on the page in fiction? How can literature, through its free exchange, affect politics?

In this galvanizing guide to literature as resistance, Nafisi seeks to answer these questions. Drawing on her experiences as a woman and voracious reader living in the Islamic Republic of Iran, her life as an immigrant in the United States, and her role as literature professor in both countries, she crafts an argument for why, in a genuine democracy, we must engage with the enemy, and how literature can be a vehicle for doing so.

Structured as a series of letters to her father, who taught her as a child about how literature can rescue us in times of trauma, Nafisi explores the most probing questions of our time through the works of Toni Morrison, Salman Rushdie, James Baldwin, Margaret Atwood, and more.

Copies of READ DANGEROUSLY signed by the author are available for purchase through the Mark Twain Store; proceeds benefit The Mark Twain House & Museum. Books will be shipped after the event. We regret that we are NOT able to ship books outside the United States as it is cost-prohibitive to do so.

Azar Nafisi is the author of the multi-award-winning New York Times bestseller Reading Lolita in Tehran, as well as Things I’ve Been Silent About, The Republic of Imagination, and That Other World. Formerly the director of The Dialogue Project and Cultural Conversations at Johns Hopkins University’s Foreign Policy Institute, she served as a Centennial Fellow at Georgetown University and has taught at Oxford and several universities in Tehran. She lives in Washington, D.C.

Susan Campbell is a Pulitzer Prize-winning journalist, a widely-read newspaper columnist, and the author of three books. She has worked across the media landscape as an award-winning print journalist, a regular commentator on WNPR, and a guest on CBS’ Sunday Morning, the BBC, WTNH-TV, and the local news show Face the State. She was also part of the Connecticut Health Investigative Team, an award-winning health and safety website.