The 5th Annual BARK TWAIN BASH…It’s the Cat’s Meow! – THIS EVENT IS SOLD OUT! 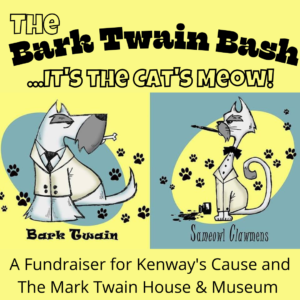 The evening includes a cash bar, food by David James Catering and special guests, including Lt Governor Susan Bysiewicz and the Commissioner of the Department of Agriculture Bryan Hurlburt, Mia Phinney from Mia’s Mission and more. We will be presenting special awards to special animal friends, and animals themselves. The event is hosted by iHeartMedia’s Renee DiNino and Buzz Engine’s Jacques Lamarre with a special presentation by Pieter Roos, Executive Director.

Among this year’s honoree’s will be; the CT Lab Squad (see below) as affectionately known by iHeartMedia and WFSB for their continuous support of community cause’s for both people and pets in Connecticut!

The West Hartford Animal Control Officer Kim Gulino for both her tireless work in helping keep pets safe in her district and for also going above and beyond for other municipalities too!

Natalie Johnson, for being an avid supporter, adopter, volunteer and foster for Kenway’s Cause. Most notably saving Ryker, a dog left for dead, and starving wrapped in a blanket. After many months of rehabilitation Ryker became a foster-fail and is now a permanent part of her family.

A special thank you to Kenway’s Cause volunteer Denise Smaglis!

2022 Kid Governor Makhi Ettienne-Modeste for his Animal Advocacy and creating awareness about this through his platform as Kid Governor of Connecticut.

Posthumous Award and Thank you to past recipient K9 Harper from the UConn Police Department and K9 Olympics.

Tickets are $35 and include the delicious goodies prepared by Chef Sue of David James Catering.

Tickets are $35 and include the delicious goodies prepared by Chef Sue of David James Catering. REGISTER HERE.