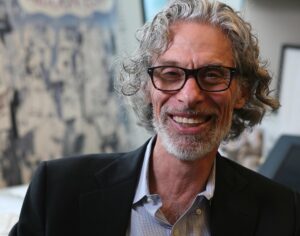 Bob Mankoff will deliver this year’s Mark Twain’s Birthday Lecture, a new event at which we bring a celebrated guest to speak about Twain, writing, humor, and other fascinating topics. Mankoff, the former, long-time cartoon editor for The New Yorker, will give a talk called “Your Sense of Humor: Don’t Leave Home Without It.”

Mankoff grew up in Queens, New York in the 1950s and 1960s. As a kid, he visited the Borscht Belt and reveled in the hilarious performances of Jewish comedians Jerry Lewis, Buddy Hackett, and Rodney Dangerfield.  These early experiences helped shape Mankoff’s view of life and led him to become a creative master practitioner of humor and cartoons. He started his career unexpectedly by quitting a Ph.D. program in experimental psychology at The City University of New York in 1974 and submitting his cartoons to The New Yorker. Three years and more than 2,000 cartoons later, he finally made it into the magazine and has since published more than 950 cartoons. He has devoted his life to discovering just what makes us laugh and seeks every outlet to do so, from developing The New Yorker’s web presence to founding The Cartoon Bank, a business devoted to licensing cartoons for use in newsletters, textbooks, magazines, and other media.

After Mankoff’s talk, we’ll gather in Hal Holbrook Hall for cake and champagne and to sing “Happy Birthday” to our own Samuel Clemens, who was born on November 30, 1835. In honor of that important year, tickets are priced at $18.35.

A book sale and signing of Mankoff’s memoir How About Never–Is Never Good For You?: My Life in Cartoons will take place after the birthday celebration.

Hear Bob talk with Terry Gross on Fresh Air about the book.

Mark Twain’s Birthday Lecture is supported by the Richard P. Garmany Fund at the Hartford Foundation for Public Giving.