BODIES ON THE LINE With Lauren Rankin and Susan Campbell (VIRTUAL) 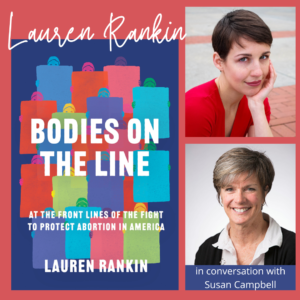 The Mark Twain House & Museum presents Lauren Rankin with Pulitzer Prize-winning journalist Susan Campbell to discuss Rankin’s book BODIES ON THE LINE: At The Front Lines Of The Fight To Protect Abortion In America, a powerful look at some of the most under-covered activists: clinic escorts.

Incisive, eye-opening, and uplifting, Bodies on the Line makes a clear case for the right to an abortion as a fundamental part of human dignity and the stakes facing us all if it ends. Abortion has been legal for nearly fifty years in the United States, but with a new conservative majority on the Supreme Court poised to overturn Roe v. Wade and an emboldened opposition in the street, the threat to its existence has never been more pressing. Clinic escorts—everyday volunteers who shepherd patients safely through the front doors to receive care—are fighting on the front lines by replacing hostility with humanity. Prepared to stand up and protect abortion access as they have for decades, even in the face of terrorism and violence, clinic escorts live—and have even died—to ensure that abortion remains not only accessible but a basic human right. Their stories have never been told––until now.

With precision and passion, Lauren Rankin traces the history and evolution of this movement to tell a broader story of the persistent threats to safe and legal abortion access, and the power of individuals to stand up and fight back. Diligently researched, featuring interviews with clinic staff, patients, experts, and activists—including the author’s own experience as a clinic escort—Bodies on the Line reframes the “abortion wars,” highlighting the power of people to effect change amid unimaginable obstacles, and the urgency of channeling that power in the face of the possible end of Roe v. Wade.

Copies of BODIES ON THE LINE signed by the author are available for purchase through the Mark Twain Store; proceeds benefit The Mark Twain House & Museum. Books will be shipped after the event. We regret that we are NOT able to ship books outside the United States as it is cost-prohibitive to do so.

Lauren Rankin is a writer, speaker, and activist who has written for the Washington Post, The Cut, Fast Company, Teen Vogue, NBC News, Slate, TIME, and many more.

She has appeared on SiriusXM, the BBC, CTV News, Times Radio, BuzzFeed News, and more, and has been a keynote speaker at places like Rutgers University and Cornell University. She served as a volunteer clinic escort at a New Jersey abortion clinic from 2014 to 2020 and is a board member of A is For, a reproductive rights advocacy organization.

Susan Campbell is a Pulitzer Prize-winning journalist, a widely-read newspaper columnist, and the author of three books. She has worked across the media landscape as an award-winning print journalist, a regular commentator on WNPR, and a guest on CBS’ “Sunday Morning,” the BBC, WTNH-TV, and the local news show “Face the State.” She was also part of the Connecticut Health Investigative Team, an award-winning health and safety website.