BURNING THE BOOKS: A HISTORY OF THE DELIBERATE DESTRUCTION OF KNOWLEDGE with Richard Ovenden, O.B.E. (Virtual) 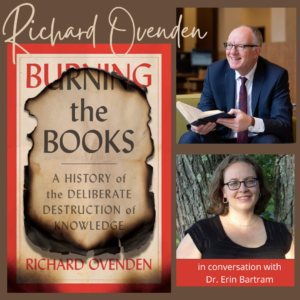 “The sound of a warning vibrates through this book.”—The Guardian

“Essential reading for anyone concerned with libraries and what Ovenden outlines as their role in ‘the support of democracy, the rule of law, and open society.’”—Wall Street Journal

“Ovenden emphasizes that attacks on books, archives and recorded information are the usual practice of authoritarian regimes.”—Michael Dirda, Washington Post

Libraries have been attacked since ancient times but have been especially threatened in the modern era, through the war as well as willful neglect.  Burning the Books  describes the deliberate destruction of the knowledge safeguarded in libraries from Alexandria to Sarajevo, from smashed Assyrian tablets to the torching of the Library of Congress. The director of the world-famous Bodleian Libraries,  Richard Ovenden, captures the political, religious, and cultural motivations behind these acts. He also shines a light on the librarians and archivists preserving history and memory, often risking their lives in the process.

More than simply repositories for knowledge, libraries support the rule of law and inspire and inform citizens. Ovenden reminds us of their social and political importance, challenging us to protect and support these essential institutions.

Copies of Burning the Books are available for purchase through the Mark Twain Store; proceeds benefit The Mark Twain House & Museum. Books will be shipped after the event. We regret that we are NOT able to ship books outside the United States as it is cost-prohibitive to do so.

Richard Ovenden  is Director of the  Bodleian Libraries at the University of Oxford  and a Fellow of  Balliol College. He was awarded the Order of the British Empire in 2019, is a member of the American Philosophical Society, and serves as Treasurer of the Consortium of European Research Libraries and President of the Digital Preservation Coalition.