BUSES ARE A COMIN’: Conversation with Charles Person, an Original Freedom Rider 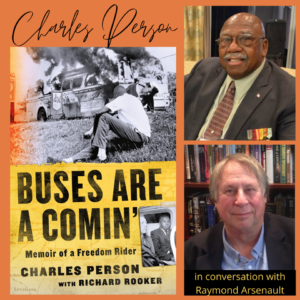 The Mark Twain House & Museum and the Amistad Center for Art & Culture are proud to present a conversation with Charles Person, a Civil Rights Movement pioneer and author of the new memoir Buses Are a Comin’. Joining Person in conversation is Professor Raymond Arsenault, author of Freedom Riders: 1961 and the Struggle for Racial Justice.

Two buses proceeded through Virginia, North and South Carolina, to Georgia where they were greeted by Dr. Martin Luther King Jr., and finally to Alabama. There, the Freedom Riders found their answer: No. Southern states would continue to disregard federal law and use violence to enforce racial segregation. One bus was burned to a shell, its riders narrowly escaping; the second, which Charles rode, was set upon by a mob that beat several riders nearly to death.

Buses Are a Comin’ provides a front-row view of the struggle to belong in America, as Charles Person accompanies his colleagues off the bus, into the station, into the mob, and into history to help defeat segregation’s violent grip on African American lives. It is also a challenge from a teenager of a previous era to the young people of today: become agents of transformation. Stand firm. Create a more just and moral country where students have a voice, youth can make a difference, and everyone belongs.

Copies of Buses Are a Comin’ are available for purchase through the Mark Twain Store; proceeds benefit The Mark Twain House & Museum. Books will be shipped after the event. We regret that we are NOT able to ship books outside the United States as it is cost-prohibitive to do so.

Programs at The Mark Twain House & Museum are made possible in part by support from the Connecticut Department of Economic and Community Development, Office of the Arts, and the