COURAGE UNDER FIRE with Steven A. Sund and Duby McDowell (In-Person & Livestream) 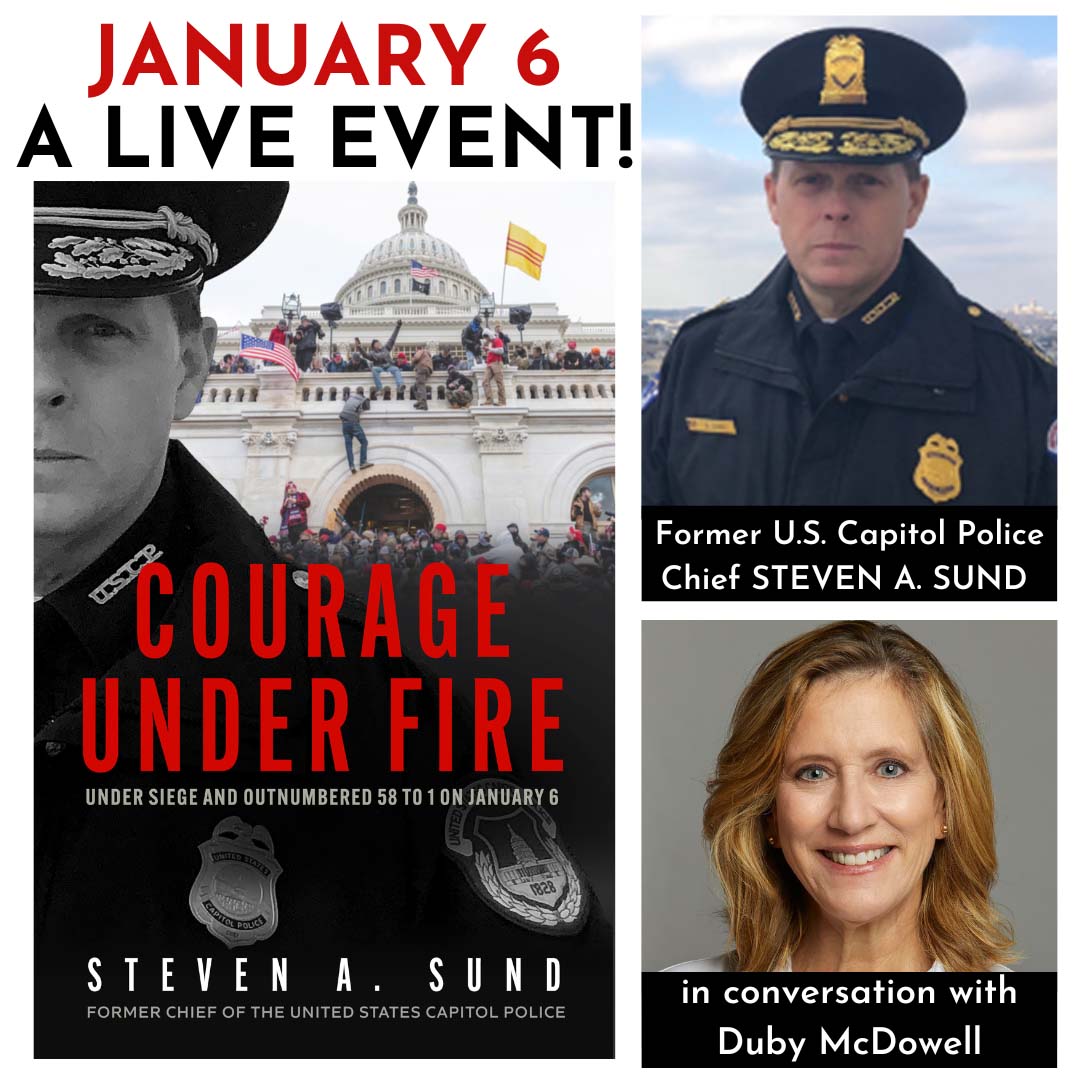 Drawing upon audio recordings, key documents, and government records, Courage Under Fire, is a gripping personal account that takes readers inside the events leading up to January 6 attack on the US Capitol. Former Capitol Police Chief Steven A. Sund will discuss his new book and its harrowing account of that pivotal day with veteran journalist Duby McDowell. This is the definitive inside story of the perfect storm of events that led up to the attack on the US Capitol on a day that rocked the nation—and you won’t want to miss it.

In-Person Event: $10 non-members, $5 members. Admission price will be deducted from your signed copy of the book with purchase. REGISTER HERE.

Livestream: $10 non-members and members. Admission price will be deducted from your signed copy of the book with purchase. REGISTER HERE.

Copies of Courage Under Fire are available for purchase through the Mark Twain Store (in-person or online); proceeds benefit The Mark Twain House & Museum. Books will be shipped after the event. We regret that we are NOT able to ship books outside the United States as it is cost-prohibitive to do so.

Steven A. Sund was the tenth Chief of Police for the United States Capitol Police from June 13, 2019, until January 8, 2021. Before joining the United States Capitol Police in 2017, Sund had a twenty-five-year law enforcement career working for the Metropolitan Police Department in Washington, DC, where he rose in the ranks from patrol officer to commander of the elite Special Operations Division (SOD). As commander, he led planning for numerous high-level security events, including four presidential inaugurations, and oversaw a number of specialized units, including the Emergency Response Team (SWAT), Special Events/Dignitary Protection Branch, Explosive Ordnance Disposal Unit (Bomb Squad), and many others.

Duby McDowell has more than thirty years of experience in journalism, politics, and public relations. She has been advising clients on communication strategy since establishing McDowell Communications Group in 2006. In 2022, the Hartford Business Journal named her to its “Power 50” list of Greater Hartford’s most influential leaders. Duby was the best-known political reporter in Connecticut for fifteen years and hosted a renowned Sunday morning television interview program which was the first stop for any politician seeking higher office. She also established the influential media blog, The Laurel, which is the go-to source for news about Connecticut journalism. McDowell has served on numerous nonprofit boards, including The Mark Twain House & Museum Board of Trustees. She co-founded the Hartford Region YWCA’s “In the Company of Women” luncheon. Twenty-five years later it’s one of the area’s most successful fundraising events and draws 1,500 attendees. Duby graduated from Harvard University and studied journalism at the University of Missouri.