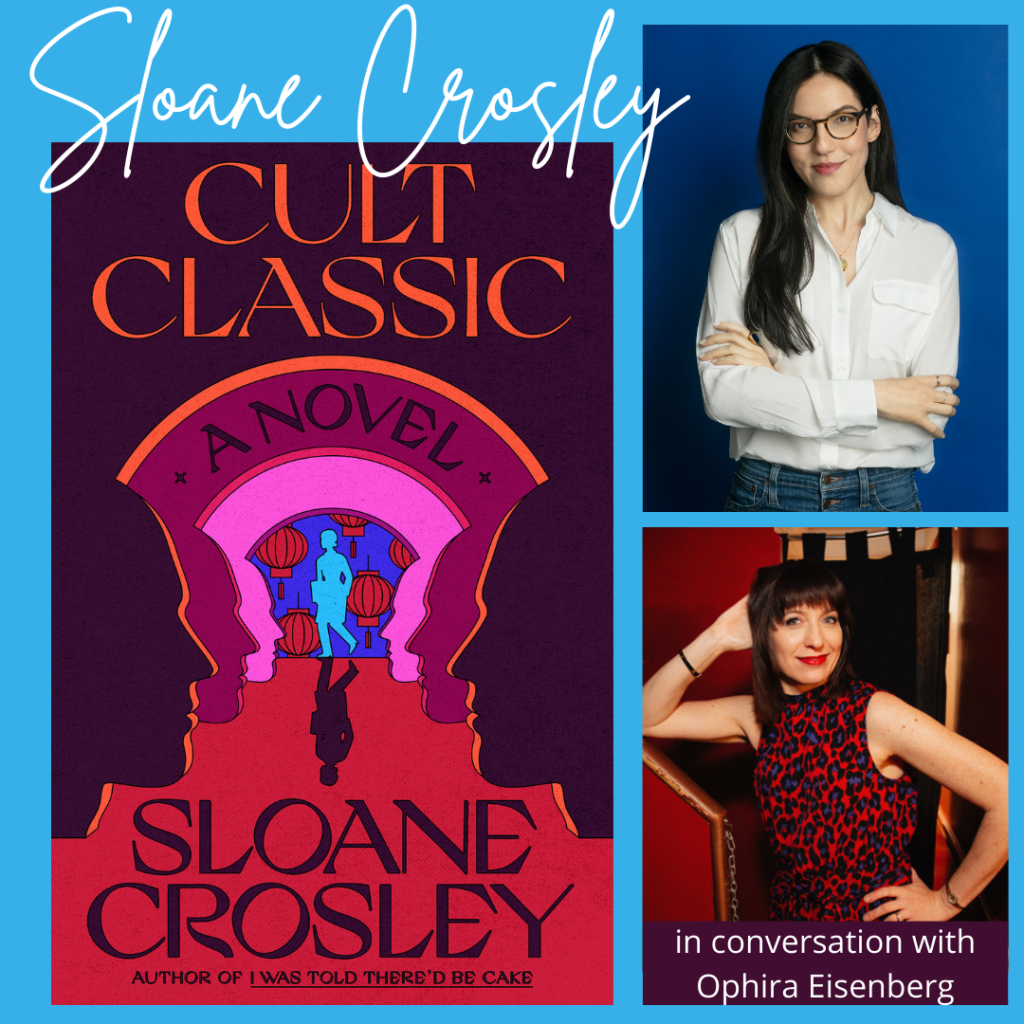 Bestselling author Sloane Crosley is joined by author, comedian and NPR host Ophira Eisenberg to discuss Crosley’s hilariously insightful and delightfully suspenseful new novel. Cult Classic is an original: a masterfully crafted tale of love, memory, morality, and mind control, as well as a fresh foray into the philosophy of romance.

MOST ANTICIPATED BOOK of 2022 by Glamour, W, Nylon, Fortune, Lit Hub, The Millions, and more!

One night in New York City’s Chinatown, a woman is at a work reunion dinner with former colleagues when she excuses herself to buy a pack of cigarettes. On her way back, she runs into a former boyfriend. And then another. And . . . another. Soon nothing is quite what it seems as the city becomes awash with ghosts of heartbreaks past.

What would normally pass for coincidence becomes something far stranger as our heroine, the recently engaged Lola, must contend not only with the viability of her current relationship but the fact that both her best friend and her former boss, a magazine editor turned mystical guru, might have an unhealthy investment in the outcome. Memories of the past swirl and converge in ways both comic and eerie, as Lola is forced to decide if she will surrender herself to the conspiring of one very contemporary cult.

Is it possible to have a happy ending in an age when the past is ever at your fingertips and sanity is for sale? With her gimlet eye, Sloane Crosley spins a wry literary fantasy that is equal parts page-turner and poignant portrayal of alienation.

Copies of CULT CLASSIC signed by the author are available for purchase through the Mark Twain Store; proceeds benefit The Mark Twain House & Museum. Books will be shipped after the event. We regret that we are NOT able to ship books outside the United States as it is cost-prohibitive to do so.

SLOANE CROSLEY is the author of The New York Times bestselling essay collections, I Was Told There’d Be Cake (a 2009 finalist for The Thurber Prize for American Humor) and How Did You Get This Number, as well as Look Alive Out There (a 2019 finalist for The Thurber Prize for American Humor) and the bestselling novel, The Clasp. She served as editor of The Best American Travel Writing series and is featured in The Library of America’s 50 Funniest American Writers, The Best American Nonrequired Reading, Phillip Lopate’s The Contemporary American Essay and others. She was the inaugural columnist for The New York Times Op-Ed “Townies” series, a contributing editor at Interview Magazine, and a columnist for The Village Voice, Vanity Fair, The Independent, Black Book, Departures and The New York Observer. She is a contributing editor at Vanity Fair. Her new novel, Cult Classic, will be published in June 2022. Her next nonfiction book, Grief Is for People, will be published in 2023. She lives in New York City.