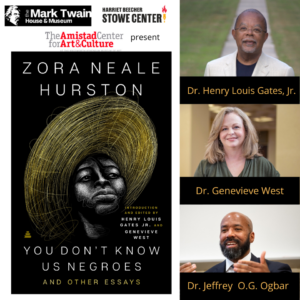 Spanning more than 35 years of work, the first comprehensive collection of essays, criticism, and articles by the legendary author of the Harlem Renaissance, Zora Neale Hurston, showcasing the evolution of her distinctive style as an archivist and author.

“One of the greatest writers of our time.”–Toni Morrison

You Don’t Know Us Negroes is the quintessential gathering of provocative essays from one of the world’s most celebrated writers, Zora Neale Hurston. Spanning more than three decades and penned during the backdrop of the birth of the Harlem Renaissance, Montgomery bus boycott, desegregation of the military, and school integration, Hurston’s writing articulates the beauty and authenticity of Black life as only she could. Collectively, these essays showcase the roles enslavement and Jim Crow have played in intensifying Black people’s inner lives and culture rather than destroying it. She argues that in the process of surviving, Black people re-interpreted every aspect of American culture–“modif[ying] the language, mode of food preparation, practice of medicine, and most certainly religion.” White supremacy prevents the world from seeing or completely recognizing Black people in their full humanity and Hurston made it her job to lift the veil and reveal the heart and soul of the race. These pages reflect Hurston as the controversial figure she was–someone who stated that feminism is a mirage and that the integration of schools did not necessarily improve the education of Black students. Also covered is the sensational trial of Ruby McCollum, a wealthy Black woman convicted in 1952 for killing her lover, a white doctor.

Demonstrating the breadth of this revered and influential writer’s work, You Don’t Know Us Negroes and Other Essays is an invaluable chronicle of a writer’s development and a window into her world and mind.

Copies of YOU DON’T KNOW US NEGROES are available for purchase through the Mark Twain Store; proceeds benefit The Mark Twain House & Museum. Books will be shipped after the event. We regret that we are NOT able to ship books outside the United States as it is cost-prohibitive to do so.

Henry Louis Gates, Jr. is the Alphonse Fletcher University Professor and Director of the Hutchins Center for African & African American Research at Harvard University. Emmy and Peabody Award-winning filmmaker, literary scholar, journalist, cultural critic, and institution builder, Professor Gates’s most recent books are Stony the Road: Reconstruction, White Supremacy, and the Rise of Jim Crow and The Black Church: This Is Our Story, This Is Our Song. He has also produced and hosted more than 20 documentary films, most recently The Black Church on PBS and Black Art: In the Absence of Light for HBO. Finding Your Roots, his groundbreaking genealogy and genetics series, is now in its eighth season on PBS.

Dr. Genevieve West is Professor of English and Chair of the Department of English, Speech, and Foreign Languages at Texas Woman’s University. A scholar of Zora Neale Hurston’s work, West has contributed to prestigious academic journals such as African American Review, Amerikastudien/American Studies, Receptions, and Women’s Studies.She is the author of one work of literary criticism, Zora Neale Hurston and American Literary Culture, and the editor of Hurston’s Harlem Renaissance short stories Hitting a Straight Lick with a Crooked Stick.

Dr. Jeffrey O.G. Ogbar has taught at the University of Connecticut’s Department of History since 1997. From 2003-2009 he served as the Director of the Africana Studies Institute. He served as Associate Dean for the Humanities in the College of Liberal Arts and Sciences from 2009-2012. In June 2012 he was named the University’s Vice Provost for Diversity. In 2014 he became founding director of the Center for the Study of Popular Music. His research interests include the 20th century United States with a focus in African American history. More specifically, Dr. Ogbar studies black nationalism and social justice movements. He has developed courses, lectured and published articles on subjects as varied as the New Negro Renaissance, mass incarceration, civil rights struggles, and hip-hop. Prof. Ogbar has held fellowships at Harvard University’s W.E.B. Du Bois Research Institute, where he completed work on his book, Black Power: Radical Politics and African American Identity. He also held fellowships at the Schomburg Center for Research in Black Culture in New York City, and the Africana studies program at the University of Miami where he conducted research for his book Hip-Hop Revolution: The Culture and Politics of Rap.