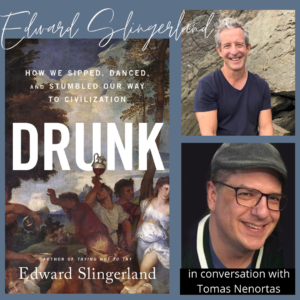 “Never refuse to do a kindness unless the act would work great injury to yourself, and never refuse to take a drink– under any circumstances.” – Mark Twain’s Notebook
The grand finale of our PICK YOUR POISON WEEK!
While plenty of entertaining books have been written about the history of alcohol and other intoxicants, none have offered a comprehensive, convincing answer to the basic question of why humans want to get high in the first place. Drunk: How We Sipped, Danced, and Stumbled Our Way to Civilization elegantly cuts through the tangle of urban legends and anecdotal impressions that surround our notions of intoxication to provide the first rigorous, scientifically-grounded explanation for our love of alcohol. Drawing on evidence from archaeology, history, cognitive neuroscience, psychopharmacology, social psychology, literature, and genetics, Slingerland shows that our taste for chemical intoxicants is not an evolutionary mistake, as we are so often told. In fact, intoxication helps solve a number of distinctively human challenges: enhancing creativity, alleviating stress, building trust, and pulling off the miracle of getting fiercely tribal primates to cooperate with strangers. Our desire to get drunk, along with the individual and social benefits provided by drunkenness, played a crucial role in sparking the rise of the first large-scale societies. We would not have civilization without intoxication. From marauding Vikings and bacchanalian orgies to sex-starved fruit flies, blind cave fish, and problem-solving crows, Drunk is packed with fascinating case studies and engaging science, as well as practical takeaways for individuals and communities. The result is a captivating and long overdue investigation into humanity’s oldest indulgence—one that explains not only why we want to get drunk, but also how it might actually be good for us to tie one on now and then.

Author Edward Slingerland is joined by Tomas Nenortas, the Hartford-based historian, author and the mastermind behind the world’s first hydro-powered distillery, Moxi on the Rocks.

FREE program, but donations are gratefully accepted. REGISTER HERE.
Signed copies of Drunk are available for purchase through the Mark Twain Store; proceeds benefit The Mark Twain House & Museum. Books will be shipped after the event. We regret that we are NOT able to ship books outside the United States as it is cost-prohibitive to do so.
———————————
About Edward Slingerland:
Edward Slingerland is Distinguished University Scholar and Professor of Philosophy at the University of British Columbia, with adjunct appointments in Psychology and Asian Studies, and Director of the Database of Religious History (DRH). Slingerland is the author of Trying Not to Try, which was named one of the best books of 2014 by The Guardian and Brain Pickings and covered widely in outlets such as the New York Times and The Atlantic. He has given talks on the science and power of spontaneity at a variety of venues across the world, including TEDx Maastricht and two Google campuses, and has done numerous interviews on TV, radio, blogs, and podcasts, including NPR, the BBC World Service and the CBC.
About Tomas Nenortas:
Author Tomas Nenortas (Victorian Hartford, Victorian Hartford Revisited) is an avid collector, connoisseur of history, architecture & genealogy and the Founder of Quiver Spirits. He maintains strong ties to the Hartford region where his family first settled in 1949. On his quest to find storage space for his emerging liquor line of Heritage Spirits, based on ancestral Lithuanian recipes, he stumbled across the old Burnside Paper Mill on the banks of the Hockanum River Falls in East Hartford and thus began a journey to create America’s first Hydro-Powered Distillery/Brewery/Blending House.
Programs at The Mark Twain House & Museum are made possible in part by support from the Connecticut Department of Economic and Community Development, Office of the Arts, and the Greater Hartford Arts Council’s United Arts Campaign and its Travelers Arts Impact Grant program, with major support from The Travelers Foundation. For more information call 860-247-0998 or visit marktwainhouse.org