EASY CRAFTS FOR THE INSANE: Kelly Williams Brown in conversation with Brini Maxwell

The New York Times bestselling author of Adulting and Gracious is joined by the crafty star of the Style Network’s The Brini Maxwell Show. 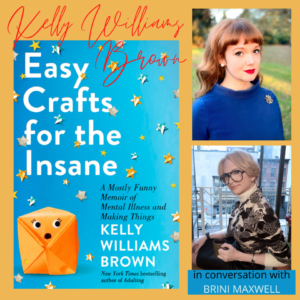 Kelly Williams Brown had 700 Bad Days. Her marriage collapsed, she broke three limbs in separate and unrelated incidents, her father was diagnosed with cancer, and she fell into a deep depression that ended in what could delicately be referred to as a “rest cure” at an inpatient facility. Before that, she had several very good years: she wrote a bestselling book, spoke at NASA, had a beautiful wedding, and inspired hundreds of thousands of readers to live as grown-ups in an often-screwed-up world, though these accomplishments mostly just made her feel fraudulent. One of the few things that kept her moving forward was, improbably, crafting. Not Martha Stewart–perfect crafting, either—what could be called “simple,” “accessible” or, perhaps, “rustic” creations were the joy and accomplishments she found in her worst days. To craft is to set things right in the littlest of ways; no matter how disconnected you feel, you can still fold a tiny paper star, and that’s not nothing. In Easy Crafts for the Insane: A Mostly Funny Memoir of Mental Illness and Making Things, crafting tutorials serve as the backdrop of a life dissolved, then glued back together. Surprising, humane, and utterly unforgettable, this is a poignant and hysterical look at the unexpected, messy coping mechanisms we use to find ourselves again.

Signed copies of Easy Crafts for the Insane are available for purchase through the Mark Twain Store and can be purchased in advance. Proceeds benefit The Mark Twain House & Museum. Books will ship after the event. We regret that we cannot ship outside of the U.S. at this time.

Kelly Williams Brown is an author and reporter living in Salem, Ore., with a large loud dog named Eleanor. She is the author of Easy Crafts for the Insane (G.P. Putnam’s Sons, 2021), Gracious (Rodale, 2017) and Adulting: How to Become a Grown-Up in 535 Easy(ish) Steps (Grand Central, 2013; revised edition, 2018). She’s also worked as a reporter and columnists for daily newspapers and magazines, an ad copywriter, non-profit communications manager and as a cocktail waitress. Born in Louisiana, she attended Loyola University New Orleans, and has worked in New Orleans, Hattiesburg, Miss., D.C. and Oregon.

Described as America’s Domestic Doyenne, Brini Maxwell is one part Sue Anne Nivens, one part Martha Stewart, with a dash of Dear Abby. Maxwell pulls the class from the past with her unparalleled personal flair for interior design, sewing and crafts, renovation, entertaining, cooking, modern etiquette and savvy household tips. Maxwell first began sharing her domestic know-how with other Manhattanites in 1998 through her self-titled cable access television show. With an emphasis on uncompromising fabulousness and you-can-do-it personal style, Brini quickly garnered a devoted fan base and established herself as the go-to- girl for domesticity with a retro-chic flair. After five years on the local airwaves, her show was picked up nationally by the Style Network. The subsequent series has been called a delightful success and has attracted a diverse audience thorough its national platform.

In addition to her television show, Ms. Maxwell has also shared her wealth of knowledge in numerous media interviews, which have included CNN, MSNBC, ABC World News Now, Late Night with Conan O’Brien, E! Entertainment Television, and TLC. She participated in the Cooper Hewitt National Design Museum’s panel on Authenticity in Design, and was a presenter at the Lambda Literary and James Beard Awards and she was recently tapped to introduce famed hints columnist Heloise for the Mark Twain House in Hartford. In 2005 she released her first book, Brini Maxwell’s Guide to Gracious Living. Since then, she has had a very successful series of podcasts in conjunction with NPR, and a popular web video series which can be found at Brini.TV. She is currently writing and testing recipes for a cheese cookbook.