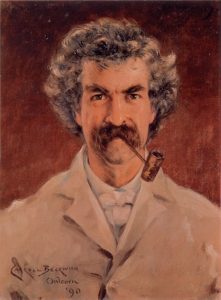 A new exhibition at The Mark Twain House & Museum celebrates the 90th anniversary of the organization that saved, and still preserves,  the home of one of America’s greatest writers.

Visitors will be able to take a peek at  90 treasures from our “attic” to mark the occasion.

The museum is exhibiting 90 objects from its collection to commemorate its 90 years of work in collecting, preserving, and interpreting the life and times of Mark Twain/Samuel Clemens and his family.

The main areas of focus are: the saving of the house and our founding; Nook Farm players; Tiffany, pop culture; the Langdon family; and Clara Clemens and Ossip Gabrilowitsch (with their home movies). Also artworks, letters, books, and signatures.

In 1929, Katharine Seymour Day, grandniece of Twain’s neighbor Harriet Beecher Stowe, helped persuade the Connecticut General Assembly to establish the Mark Twain Memorial and Library Commission. The Friends of Hartford lobbied the state for many years to stop the demolition of the historic Twain House.

The Memorial rented the ground floor of Twain’s Victorian-era mansion to Hartford Public Library, and apartments on the upper floors to tenants of means. Restoration efforts began in the 1950s. The house officially opened as a museum in 1974, 100 years after Samuel Clemens and his family took possession of their new Victorian-era mansion, where they lived until 1891.

Also: examples of Tiffany glass in the house; themed Cabbage Patch dolls; family furniture; and a teakwood decorative panel by Lockwood de Forest (which looks like a fish).

Admission is free but RSVP is requested. Register here.