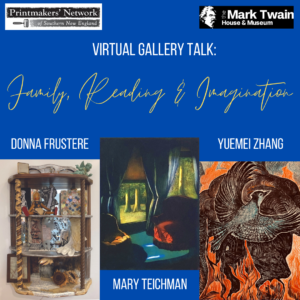 Donna Frustere will be talking about how she incorporated Family traditions, cultures, and objects using the printmaking media in her work. She will use examples of her recycling plates, prints and tactile images in her work telling stories. From intaglios to monotypes, Donna will discuss how a particular print form may enhance a message or tell a story with emotion.

Mary Teichman will talk about the artistic imagination, how it influences her printmaking process, why she became an artist, and how she chooses her subjects and imagery. In addition, she will demonstrate her printmaking and show the four color stages of her print featured in the exhibition.

The Evocative Mark Twain Inspires the Printmakers’ Network of Southern New England is on view at The Mark Twain House & Museum beginning March 24, 2022 with a free opening reception at 5:30pm and is set to run through January 23, 2023. The museum is open daily from 10AM to 4:30PM. Admission to the exhibition is included in house tour admission; museum center-only tickets including The Evocative Mark Twain… is $7.25. For information and tour reservations, please CLICK HERE.

Donna Frustere is a Master printmaker/Art Educator. While completing her undergraduate degree in Art Education from Orono Me, she became intrigued with the printmaking process. Ms. Frustere received her MAEd from The Hartford Art School with extensive concentration in printmaking.

Ms. Frustere has taught Art since 1979 in both Private and Public Inner City Schools. She is a National and Regional presenter for the National Art Education Association, CAEA, and conducts professional development seminars live and virtual. Frustere exhibits Nationally and Internationally with “The Printmakers Network of Southern New England.” She is a Founding member of The Master Teaching Artist program with the CT Art and Culture Committee. She served as president of the Canton Artist Guild in CT, Chair of CT Women’s’ Artist, and is represented by The Gallery on the Green as well as archived in the Norwich CT Slater Museum. In 2021 Frustere received the CT Art Educator of the Year. Frustere’s awards are numerous, as is her impact on her students over her extensive career.

Frustere reflects on her past, drawing inspiration from family and surroundings. She often adds elements to her prints to take you in. Frequent trips to Italia maintain a connection with family which is essential in her work. She believes we are part of our tradition, culture, and environment. Her Art reveals who she is, what she believes, and how she processes issues of the day.

Mary Teichman was born in 1954 in Newark, NJ, USA. She received a BFA from the Cooper Union School of Art in New York City in 1976. She was a painting and drawing major, but during her time there she discovered multi-plate color separation etching.

Mary’s work has been included in more than 250 national and international invitational and juried exhibitions, including The National Original Print Exhibition of the Royal Society of Painter-Printmakers in London; New England on Paper: Contemporary Art in the Boston Athenaeum’s Print and Photographs Collection; the Rene Carcan International Prize for Printmaking Exhibit in Brussels (twice); the Brooklyn Museum’s 22nd National Print Exhibition; and the 163rd Exhibition at the National Academy of Design in New York.

Mary has been the recipient of many awards including The Society of American Graphic Artists (SAGA) Araun Bose Memorial Award, the SAGA K. Caraccio Purchase prize, The New York Society of Etchers Recognition for Excellence, and numerous awards from the Boston Printmakers and the Print Club of Albany. She was twice a finalist for the Rene Carcan International Prize for Printmaking in Brussels, and shortlisted for the Mario Avati International Prize for Printmaking in Paris.

Her etchings are in the permanent collections of the Brooklyn Museum, The Boston Athenaeum, The New York Public Library, The Museum of the City of New York, and the University City Art Museum of the Guangzhou Academy of Fine Art, among others. She received the 2019 Society of American Graphic Artists award for outstanding commitment and contributions to the fine art printmaking.

Yuemei Zhang was born in Shanghai and studied printmaking and fine arts for her undergraduate/graduate programs at Central Fine Art Academy, Beijing, China.  In 1989 she moved to the US where she taught printmaking and fine art at colleges and universities for over 20 years.   Her art has been in solo and group exhibitions around the world and is in the collections of museums, galleries, and private collectors in the US, China, Canada, the United Kingdom, and Germany.  She has received many awards in the US and China.  Dave Dury, a journalist for the Hartford Courant writes, “Zhang’s … artist roots remain firmly planted in her native China, highlighting Zhang’s strong intertwining of her eastern roots with her artistic western printmaking techniques.”