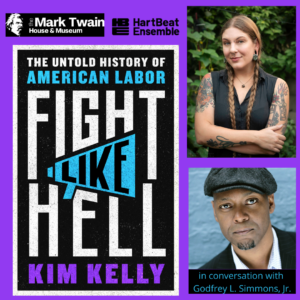 The Mark Twain House & Museum and HartBeat Ensemble welcomes labor columnist and independent journalist Kim Kelly to discuss the history of the labor movement and the people—workers, organizers, and their allies—who risked everything to win fair wages, better working conditions, disability protections, and an eight-hour workday.

As America grapples with the unfinished business of emancipation, the New Deal, and Johnson’s Great Society, Fight Like Hell offers a transportive look at the forgotten heroes who’ve sacrificed to make good on the nation’s promises. Join us for this timely discussion of a book that is both an inspiring read and a vital contribution to American history.

Copies of FIGHT LIKE HELL signed by the author are available for purchase through the Mark Twain Store; proceeds benefit The Mark Twain House & Museum. Books will be shipped after the event. We regret that we are NOT able to ship books outside the United States as it is cost-prohibitive to do so.

Kim Kelly is an independent journalist, author, and organizer. She has been a regular labor columnist for Teen Vogue since 2018, and her writing on labor, class, politics, and culture has appeared in The New Republic, The Washington Post, The New York Times, The Baffler, The Nation, the Columbia Journalism Review, and Esquire, among many others. Kelly has also worked as a video correspondent for More Perfect Union, The Real News Network, and Means TV. Previously, she was the heavy metal editor at “Noisey,” VICE’s music vertical, and was an original member of the VICE Union. A third-generation union member, she is a member of the Industrial Workers of the World’s Freelance Journalists Union as well as a member and elected councilperson for the Writers Guild of America, East (WGAE).

Godfrey L. Simmons, Jr., artistic director of Hartford’s HartBeat Ensemble, is an award-winning actor, producer, director, and playwright who has spent thirty years amplifying the voices of marginalized people and communities. In 2012, he co-founded Civic Ensemble, a regional theatre in Ithaca, NY. He was a Producing Artist for Off-Broadway’s Epic Theatre Ensemble for four years, appearing in a dozen productions. He is a lifetime member of Ensemble Studio Theatre and sits on the board of the Network of Ensemble Theaters.