Fiona Davis Live and In-Person on THE MAGNOLIA PALACE 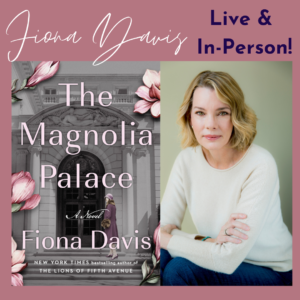 The Mark Twain House & Museum invites you to join Fiona Davis for a captivating conversation on THE MAGNOLIA PALACE, a tantalizing historical novel about the secrets, betrayal, and murder within the Frick, one of New York City’s most impressive Gilded Age mansions.

In the 1910s, any New York City landmark worth its salt was graced with the likeness of Angelica, the most sought-after artists’ model of her time. From the Plaza Hotel to the Manhattan Bridge, her visage was a marker of excellence and beauty. So, it’s no coincidence that the home of Henry Clay Frick featured a reclining nude carving of the celebrated muse. But by 1919, Lillian Carter, the woman known as Angelica, is struggling to find work, embroiled in a headline-making scandal, and homeless. When she unexpectedly finds employment as Helen Frick’s private secretary, she jumps at the chance, praying that her true identity isn’t discovered. Soon, Lillian’s life becomes intertwined with Helen’s in ways she could never have imagined—pulling her into a tangled web of romantic trysts, stolen jewels, and drama that runs so deep, the stakes may be life or death.

Nearly fifty years later, the Frick has become one of New York City’s most impressive museums and is the site of a Vogue photoshoot that has the potential to change struggling young model Veronica Weber’s life. But rather than finding fame, Veronica stumbles on something much more interesting: a series of hidden messages that lead to a hunt throughout the museum in search of answers. What she discovers may not only solve Veronica’s financial woes, but could finally reveal the truth behind a decades-old murder.

In THE MAGNOLIA PALACE, Davis pulls readers into a captivating dual narrative exploring the Frick both as a private family residence and the public institution it would become. The novel unwinds through the alternating perspectives of two women, both models, whose experiences at the Frick are separated by nearly fifty years and are linked across the decades by the imperious daughter of Henry Clay Frick, Helen Frick.

Tickets, including a signed copy of the book, are $35/$30 for Members. Register today by clicking HERE!

New York Times bestselling author Fiona Davis has spent the better part of a decade mining hidden histories of iconic New York City buildings, skillfully using each setting to illuminate the experiences of women, and asking questions about how women’s voices have changed over time, how cities have changed, and how the arts have impacted lives. She’s done so to great effect as a nationally bestselling, critically acclaimed, library and bookseller darling, with a massive and devoted following. With 2020’s The Lions of Fifth Avenue, set at the New York Public Library, Davis was launched further into the literary spotlight as a Good Morning America Book Club pick and New York Times bestseller.