FORGET THE ALAMO – The Rise and Fall of an American Myth 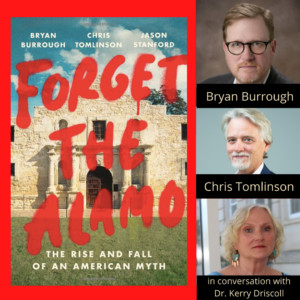 In 2021, the Bob Bullock Texas State History Museum was strong-armed by conservatives, a charge led by the state’s Lieutenant Governor, to cancel a book discussion with the authors of FORGET THE ALAMO – The Rise and Fall of an American Myth. At the center of the controversy: who gets to tell our history, what narratives can be challenged, and which stories stay in the margins?

The authors – Chris Tomlinson and Bryan Burrough – join Twain scholar Dr. Kerry Driscoll (author of Mark Twain Among the Indians and Other Indigenous Peoples) discuss the real story of the Alamo, dispelling the myths, exploring why they had their day for so long, and explaining why the ugly fight about its meaning is now coming to a head. Every nation needs its creation myth, and since Texas was a nation before it was a state, it’s no surprise that its myths bite deep. There’s no piece of history more important to Texans than the Battle of the Alamo, when Davy Crockett and a band of rebels went down in a blaze of glory fighting for independence from Mexico, losing the battle but setting Texas up to win the war. However, that version of events, as Forget the Alamo definitively shows, owes more to fantasy than reality. Just as the site of the Alamo was left in ruins for decades, its story was forgotten and twisted over time, with the contributions of Tejanos–Texans of Mexican origin, who fought alongside the Anglo rebels–scrubbed from the record, and the origin of the conflict over Mexico’s push to abolish slavery papered over. Forget the Alamo provocatively explains the true story of the battle against the backdrop of Texas’s struggle for independence, then shows how the sausage of myth got made in the Jim Crow South of the late nineteenth and early twentieth century. As uncomfortable as it may be to hear for some, celebrating the Alamo has long had an echo of celebrating whiteness. In the past forty-some years, waves of revisionists have come at this topic, and at times have made real progress toward a more nuanced and inclusive story that doesn’t alienate anyone. But we are not living in one of those times; the fight over the Alamo’s meaning has become more pitched than ever in the past few years, even violent, as Texas’s future begins to look more and more different from its past. It’s the perfect time for a wise and generous-spirited book that shines the bright light of the truth into a place that’s gotten awfully dark.

Copies of FORGET THE ALAMO are available for purchase through the Mark Twain Store; proceeds benefit The Mark Twain House & Museum. Books will be shipped after the event. We regret that we are NOT able to ship books outside the United States as it is cost-prohibitive to do so.

BRYAN BURROUGH is a special correspondent at Vanity Fair magazine and the author of six books, including the No. 1 New York Times Best-Seller Barbarians at the Gate and his latest, Days of Rage. He is also a three-time winner of the prestigious Gerald Loeb Award for Excellence in Financial Journalism.

Born in 1961, Bryan was raised in Temple, Texas, and graduated from the University of Missouri School of Journalism in 1983. From 1983 to 1992 he was a reporter for The Wall Street Journal, where he reported from Dallas, Houston, Pittsburgh and, during the late 1980s, covered the busy mergers and acquisitions beat in New York. He has written for Vanity Fair since 1992.

In 1990 Bryan and John Helyar co-authored Barbarians, the story of the fight for control of RJR Nabisco. The book, which spent 39 weeks on the New York Times bestseller list, has been hailed as one of the most influential business narratives of all time. Bryan joined Vanity Fair in 1992, where he has reported from locales as diverse as Hollywood, Nepal, Moscow, Tokyo and Jerusalem.

His subsequent books include: Vendetta: American Express and the Smearing of Edmond Safra, 1992; Dragonfly: An Epic Story of Survival in Space, 1998; Public Enemies, 2004; and The Big Rich: The Rise and Fall of the Greatest Texas Oil Fortunes was published by Penguin Press in 2009.

In addition to consulting work for “60 Minutes” and various Hollywood studios, Bryan has authored numerous book reviews and OpEd articles in The New York Times, Los Angeles Times and Washington Post. He has appeared on Today, Good Morning America, and in many documentary films. Bryan splits his time between Chatam, N.J. and Austin, Texas.

CHRIS TOMLINSON is the business columnist for the Houston Chronicle, focusing on energy, business and policy. Until April 2014, he was the supervisory correspondent for The Associated Press in Austin, responsible for state government and political reporting in Texas.

From 2007-2009, he was an international investigative reporter for the AP working in Iraq, Austin and Washington DC. He served as the AP’s East Africa bureau chief in Nairobi, Kenya from 2004 to 2007 and was responsible for text, photo and television coverage from14 countries. He was appointed East Africa correspondent in 2000 and before that served two years as an international editor at AP’s headquarters in New York from 1998-2000. He started with the AP in 1995 as the Central Africa correspondent based in Rwanda. Tomlinson covered the 1994 elections that ended Apartheid in South Africa for Asahi Shimbun, a Japanese newspaper.

Shortly after the 9/11 terror attacks, the AP assigned Tomlinson to work from the USS Theodore Roosevelt air craft carrier and later to cover operations in Afghanistan, including the Battle of Tora Bora. During the invasion of Iraq in 2003, the AP chose Tomlinson as their lead embedded reporter and he has spent two years in Iraq since then. Tomlinson has also reported from conflicts in Uganda, Burundi, Congo, Sudan and Somalia. Before becoming a journalist, he spent seven years in the U.S. Army. He graduated from the University of Texas at Austin in 1992 with special honours in humanities.

Kerry Driscoll is Professor of English Emerita at the University of St. Joseph and currently an Associate Editor at the Mark Twain Papers and Project at UC, Berkeley. A long-time Mark Twain scholar and friend of the museum, she is the author of Mark Twain among the Indians and Other Indigenous Peoples (2018).