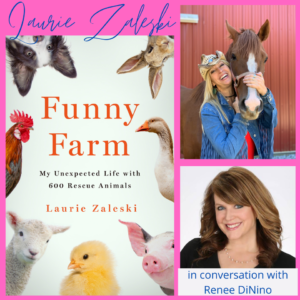 Laurie Zaleski never aspired to run an animal rescue; that was her mother Annie’s dream. But from girlhood, Laurie was determined to make the dream come true. Thirty years later as a successful businesswoman, she did it, buying a 15-acre farm deep in the Pinelands of South Jersey. She was planning to relocate Annie and her caravan of ragtag rescues―horses and goats, dogs and cats, chickens and pigs―when Annie died, just two weeks before moving day. In her heartbreak, Laurie resolved to make her mother’s dream her own. In 2001, she established the Funny Farm Animal Rescue outside Mays Landing, New Jersey. Today, she carries on Annie’s mission to save abused and neglected animals.Funny Farm is Laurie’s story: of promises kept, dreams fulfilled, and animals lost and found. It’s the story of Annie McNulty, who fled a nightmarish marriage with few skills, no money and no resources, dragging three kids behind her, and accumulating hundreds of cast-off animals on the way. And lastly, it’s the story of the brave, incredible, and adorable animals that were rescued. Joining Laurie will be iHeartMedia’s Renee DiNino, an animal advocate, dog lover, and board member of Kenway’s Cause rescue.
FREE virtual event, although donations are gratefully accepted. REGISTER HERE.
Copies of Funny Farm signed by the author are available for purchase through the Mark Twain Store; proceeds benefit The Mark Twain House & Museum. Books will be shipped after the event. We regret that we are NOT able to ship books outside the United States as it is cost-prohibitive to do so.
———————
ABOUT THE AUTHOR
LAURIE ZALESKI is the founder of the Funny Farm, a charitable organization located in Mizpah, New Jersey. Since 2000, the farm has welcomed all kinds of rescue animals. Laurie is also the founder, president and CEO of Art-Z Graphics. She has been named a New Jersey Heartland Hero, is listed in the 2019 Who’s Who of Professional Women, and has received numerous awards and acknowledgements for her work to save animals and educate the public about animal abuse.
Programs at The Mark Twain House & Museum are made possible in part by support from the Connecticut Department of Economic and Community Development, Office of the Arts, and the Greater Hartford Arts Council’s United Arts Campaign and its Travelers Arts Impact Grant program, with major support from The Travelers Foundation. For more information call 860-247-0998 or visit marktwainhouse.org.