GO WEST YOUNG MAN: A Father and Son Rediscover America on the Oregon Trail with B.J. and Henry Hollars 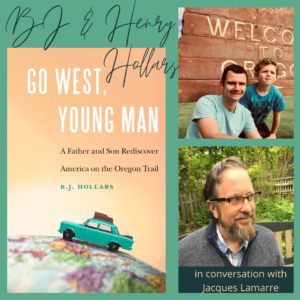 As the warmer months approach, particularly after two years of being cooped up, our thoughts are turning to family vacations and travel. Author B.J. Hollars and his young son Henry join playwright Jacques Lamarre to discuss their father-son adventures “roughing it” out west in modern America.

At the sound of the bell on the last day of kindergarten, B.J. Hollars and his six-year-old son, Henry, hop in the car to strike out on a 2,500-mile road trip retracing the Oregon Trail. Their mission: to rediscover America, and Americans, along the way. Throughout their two-week adventure, they endure the usual setbacks (car trouble, inclement weather, and father-son fatigue), but their most compelling drama involves people, privilege, and their attempt to find common ground in an all-too-fractured country. Join father and son team B.J. and Henry Hollars for a reading and conversation on their journey, their reckoning with our nation’s founding, and their renewal of faith in America today.

Copies of GO WEST YOUNG MAN signed by the author are available for purchase through the Mark Twain Store; proceeds benefit The Mark Twain House & Museum. Books will be shipped after the event. We regret that we are NOT able to ship books outside the United States as it is cost-prohibitive to do so.

B.J. Hollars is the author of several books, most recently Go West Young Man: A Father and Son Rediscover America on the Oregon Trail. His work has been featured in The Washington Post, Parents Magazine, NPR, and elsewhere. He is the recipient of the Truman Capote Prize for Literary Nonfiction, the Anne B. and James B. McMillan Prize, the Council of Wisconsin Writers’ Blei-Derleth Award, among others. He is an associate professor of English at the University of Wisconsin-Eau Claire.

Henry Hollars is the illustrator of Go West Young Man: A Father and Son Rediscover America on the Oregon Trail. His work has been featured on the family refrigerator and elsewhere. He is the family record-holder for highest jump on the backyard trampoline. Additionally, he has endured a 2,500-mile road trip with his father.