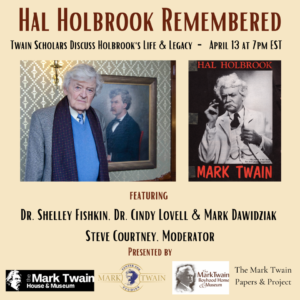 Join us Tuesday April 13th at 7 p.m. for a chat among some of the folks who worked most closely with Hal over the years and who knew him best. Twain scholars Dr. Shelley Fisher Fishkin, Mark Dawidziak, Steve Courtney, and Dr. Cindy Lovell will discuss their relationship with Hal, his contributions to Mark Twain studies, and share personal insights into the man they called both friend and colleague.

The world lost a talented, kind, and generous man in Hal Holbrook this past January. So well-known and beloved for his vivid, delightful, funny and principled portrayal of Samuel Langhorne Clemens-our Mark Twain-Holbrook had a long and very personal attachment to the sites that helped preserve and promote Twain’s legacy. He first portrayed Mark Twain on stage in the early 1950s and got his big break performing his embodiment of Twain on the Ed Sullivan show in 1956. He played Mark Twain longer than Twain himself, finally hanging up the white suit at age 92 in 2017.

To pay respect not only to Hal’s legendary career but also to his contributions to Twain studies, The Mark Twain House & Museum, in partnership with The Center for Mark Twain Studies in Elmira, New York, The Mark Twain Papers & Project in Berkeley, California, and the Mark Twain Boyhood Home & Museum in Hannibal, Missouri are presenting a two-part tribute to Hal Holbrook.  This panel discussion is Part II.

This is a FREE program. REGISTER HERE.

Donations are gratefully accepted, with all gifts received shared equally between all four organizations. 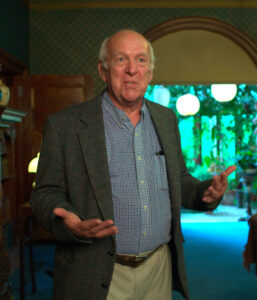 Steve Courtney is the author of Joseph Hopkins Twichell: The Life and Times of Mark Twain’s Closest Friend (Georgia, 2008), winner of the Connecticut Book Award; ‘The Loveliest Home That Ever Was’: The Story of the Mark Twain House in Hartford (Dover, 2011); and Mark Twain’s Hartford (Arcadia, 2016), among other works. He is co-editor, with Peter Messent and Harold K. Bush, of The Mark Twain-Joseph Hopkins Twichell Letters (Georgia, 2017, paperback edition published 2020). He has been a journalist for forty years, much of that time at The Hartford Courant, and has served as both publicist and curatorial project coordinator at The Mark Twain House & Museum in Hartford, Connecticut.

Mark Dawidziak is the television critic for the Cleveland Plain Dealer, as well as an acclaimed author, playwright, director, and actor who frequently portrays Twain in live performances. A recognized Mark Twain scholar, he has written several books on the author, including Mark My Words: Mark Twain on Writing (1996) and Horton Foote’s The Shape of the River: The Lost Teleplay About Mark Twain (2003). His other books include the horror novel Grave Secrets and two histories of landmark TV series: The Columbo Phile: A Casebook and The Night Stalker Companion. His most recent book is The Shawshank Redemption Revealed, a look at the beloved film based on Stephen King’s story. A New York native and a journalism graduate of George Washington University, he has been an adjunct professor at Kent State University since 2009 and is currently working on a biography of Edgar Allan Poe for St. Martin’s Press. 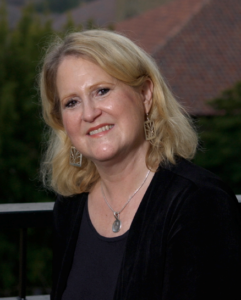 Shelley Fisher Fishkin is the Joseph S. Atha Professor of Humanities, Professor of English, and Director of American Studies at Stanford University. Her principal concern throughout her career has been literature and social justice. Much of her work has focused on issues of race and racism in America, and on recovering and interpreting voices that were silenced, marginalized or ignored in the nation’s past. She is the award-winning author, editor, or co-editor of forty-eight books and over one hundred articles, essays, columns and reviews. She holds a Ph.D. in American Studies from Yale and is former president of the American Studies Association.  Her many publications on Mark Twain include the 29-volume Oxford Mark Twain, which she edited, and which included contributions from Toni Morrison, Arthur Miller, Kurt Vonnegut, Jr., Gore Vidal, and Hal Holbrook, among others. Her Twain books also include Was Huck Black? Mark Twain and African American Voices, Lighting Out for the Territory, Mark Twain’s Book of Animals, and the Mark Twain Anthology: Great Writers on his Life and Work. She brought Mark Twain’s play Is He Dead? to the public as editor of an edition of it and as a producer of a production of the play on Broadway. She was awarded John S. Tuckey lifetime achievement award by the Center for Mark Twain Studies in 2017, where the award announcement recognized her efforts “to assure that a rigorous, dynamic account of Twain stays in the public consciousness.” Her current project is a book entitled Citizen Twain: Mark Twain and Hal Holbrook on Racism, Jingoism and Corruption.

Dr. Cindy Lovell earned her BA and MA in Education from Stetson University and her PhD from the University of Iowa. She

has held tenured positions at Stetson University and Quincy University and formerly served as executive director of both the Mark Twain Boyhood Home & Museum in Hannibal, MO and the Mark Twain House & Museum in Hartford, CT. She created and co-produced Mark Twain: Words & Music, a double-album featuring Jimmy Buffett, Clint Eastwood, Brad Paisley, and others as a benefit for the Boyhood Home. Cindy booked Holbrook twice to perform in Hannibal and brought him to Hartford to perform on his 90th birthday. She appears in the documentary, Holbrook/Twain: An American Odyssey. She has lectured widely on Mark Twain, including annual Twain talks aboard the American Queen Steamboat on the Mississippi River, at Oxford University, the National Steinbeck Center, and the Bermuda National Library, and on behalf of Kensal Rise Library in London, which Twain helped launch. Currently, she is the director of education at Epic Flight Academy in New Smyrna Beach, Florida where she learned to fly many years ago and teaches education courses for the University of South Florida and Mark Twain courses for Quincy University.

Part I, on April 6, is a screening of the award-winning documentary Holbrook/Twain: An American Odyssey, followed by a talk back with the filmmakers. Register for Part I HERE.