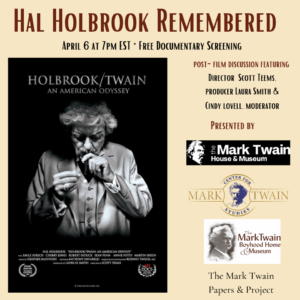 The world lost a talented, kind, and generous man in Hal Holbrook this past January. So well-known and beloved for his vivid, delightful, funny and principled portrayal of Samuel Langhorne Clemens-our Mark Twain-Holbrook had a long and very personal attachment to the sites that helped preserve and promote Twain’s legacy. He first portrayed Mark Twain on stage in the early 1950s and got his big break performing his embodiment of Twain on the Ed Sullivan show in 1956. He played Mark Twain longer than Twain himself, finally hanging up the white suit at age 92 in 2017.

To pay respect not only to Hal’s legendary career but also to his contributions to Twain studies, The Mark Twain House & Museum, in partnership with The Center for Mark Twain Studies in Elmira, New York, The Mark Twain Papers & Project in Berkeley, California, and the Mark Twain Boyhood Home & Museum in Hannibal, Missouri are presenting a two-part tribute to Hal Holbrook.  This virtual screening is Part I.

The award-winning documentary Holbrook/Twain: An American Odyssey chronicles the triumphant and tumultuous history of the longest-running one-man show in the history of theater, Hal Holbrook’s Tony and Emmy Award-winning masterpiece “Mark Twain Tonight!” Following the screening will be a talk-back featuring director Scott Teems and producer Laura Smith, moderated by Dr. Cindy Lovell.

This is a FREE program. REGISTER HERE.

Donations are gratefully accepted, with all gifts received shared equally between all four organizations.

You can purchase a copy of Holbrook/Twain through The Mark Twain store. Proceeds benefit The Mark Twain House & Museum. We regret that we cannot ship outside of the U.S. at this time.

Scott Teems is a Georgia-born filmmaker whose credits as writer-director include the award-winning films THAT EVENING SUN, HOLBROOK/TWAIN, and most recently, THE QUARRY. Upcoming projects include HALLOWEEN KILLS, which Scott co-wrote with Danny McBride and David Gordon Green, and INSIDIOUS 5, as well as adaptations of Stephen King’s FIRESTARTER and Abraham Verghese’s CUTTING FOR STONE. On the television side, Scott was most recently a writer and co-executive producer of the popular Netflix series NARCOS: MEXICO. Previously, he wrote, directed, and produced three seasons of the acclaimed, Peabody Award-winning SundanceTV drama RECTIFY.

Laura D. Smith is an independent producer of award-winning narrative and documentary films. Named on Variety’s “10 Producers to Watch” list and nominated for the Piaget Producers Award at the Film Independent Spirit Awards, Smith produced two of Indiewire’s “Top 20 Grossing Indies of 2015” – Brett Haley’s I’LL SEE YOU IN MY DREAMS, which premiered at the 2015 Sundance Film Festival and was nominated for a Gotham Award; and David Robert Mitchell’s indie horror sensation IT FOLLOWS, which premiered at the 2014 Cannes Film Festival and garnered three Film Independent Spirit Award nominations. Her feature TO THE STARS, directed by Martha Stephens, premiered in U.S. Narrative Competition at the 2019 Sundance Film Festival and was released by Samuel Goldwyn Films last year. Most recently, Smith completed Scott Teems’ dramatic thriller THE QUARRY, based on the acclaimed South African novel by Damon Galgut and starring Michael Shannon and Shea Whigham. The film was due to premiere at the 2020 SXSW Film Festival and have its theatrical release in April 2020, however both were cancelled as a result of pandemic. The film can now be seen on demand.

Smith is a Sundance Institute Fellow, a Film Independent Producing Fellow, and has lectured and served on panels for universities and organizations such as UCLA, Sundance Institute, Film Independent, SXSW, Austin Film Society, Denver Film Society, University of North Carolina School of the Arts, Baylor University, and SAGIndie. Smith began her career working under Oscar-nominated filmmakers Andrew Niccol and Paul Thomas Anderson. Other producing credits include notable indies such as THAT EVENING SUN, FACTORY GIRL, HAPPY ENDINGS, COME EARLY MORNING, LONELY HEARTS, 44 PAGES, A SINGLE FRAME, and HOLBROOK/TWAIN: AN AMERICAN ODYSSEY.  In addition to her film work, Smith has produced corporate video and viral web campaigns for clients such as Nike, Ray-Ban, and TOMS Shoes. She holds a B.A. from U.C.L.A., graduating Phi Beta Kappa with a Major in Mass Communication Studies and a Specialization in Business & Administration.

Part II, on April 13, is a panel discussion with a few folks who worked the closest with Hal over the years and knew him best. Register for Part II HERE.