HARLOTS WHORES AND HACKABOUTS: A cultural history of the sex trade with Kate Lister and Melinda Chateauvert (VIRTUAL) 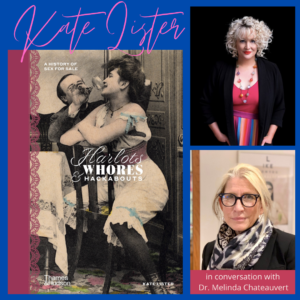 The Mark Twain House & Museum is delighted to Present Dr. Kate lister and Dr. Melinda Chateauvert for an afternoon conversation discussing Lister’s latest book HARLOTS WHORES AND HACKABOUTS: A History of Sex for Sale, an enlightening illustrated cultural history of the sex trade that puts sex workers center stage, revealing how they have lived and worked all around the globe.

The history of selling sex is a hidden one―and too often its practitioners are pushed to the margins of history. This book redresses the balance, revealing the history of the sex trade through the eyes of sex workers, from medieval streets to Wild West saloons, and from brothels to state bedrooms. These enthralling tales are brought to life by Whores of Yore creator Kate Lister’s witty and authoritative text, and illuminated by a rich archive of photographs, artworks, and objects offering insight into sex workers’ lives, challenging assumptions about this age-old trade.

Harlots, Whores & Hackabouts’ chapters are structured thematically in a broadly chronological order, each one introducing a lively cast of complex and entertaining characters operating in an array of different periods, locations, and settings. In ancient Mesopotamia, the harlot Shamhat was powerful and respected, able to civilize the wild man Enkidu through her charms. In medieval London, Elizabeth Moryng serviced religious clergy under the guise of an embroidery business, though she was eventually jailed for being a prolific panderer and bawd. In the hedonistic floating world of Edo, Japan, Kabuki actresses and geishas entertained and pleasured their patrons. Lister’s engaging and illuminating tales invite readers to look, listen, and reconsider everything they thought they knew about the world’s oldest profession. Together, these captivating tales of sex workers from around the world and throughout history provide a powerful context to contemporary debates about sexuality and the empowerment of women.

Copies of HARLOTS WHORES AND HACKABOUTS are available for purchase through the Mark Twain Store; proceeds benefit The Mark Twain House & Museum. Books will be shipped after the event. We regret that we are NOT able to ship books outside the United States as it is cost-prohibitive to do so.

Dr. Kate Lister is a lecturer for the School of Arts and Communication at Leeds Trinity University. Kate primarily researches the literary history of sex work and curates the online research project, Whores of Yore, an interdisciplinary digital archive for the study of historical sexuality. Kate has also published in the medical humanities, material culture, Victorian studies, and Neo-Medievalism. She regularly writes about the history of sexuality for news, VICE, and the Wellcome Trust. Kate won the Sexual Freedom Publicist of the Year Award in 2017.

Melinda Chateauvert, Ph.D., is a writer, historian, and activist with three decades of experience in movements for gender equality, sexual freedom, and civil rights advocacy. Working with the NAACP Legal Defense Fund, Dr. Chateauvert has served as an expert witness in class action litigation challenging race discrimination in higher education and public contracting, as well as documenting racial bias in death penalty cases. MARCHING TOGETHER: WOMEN OF THE BROTHERHOOD (University of Illinois Press, 1997) documents the work of African American women in organizing the Brotherhood of Sleeping Car Porters, the first international black trade union in the AFL-CIO; it remains the standard for labor historians. Her recent book, SEX WORKERS UNITE: A HISTORY OF THE MOVEMENT FROM STONEWALL TO SLUTWALK (Beacon Press, Jan. 2014) traces the vital activism of sex workers at the fringes of gay liberation, AIDS activism, labor organizing, and the long struggle against police violence and criminalization.