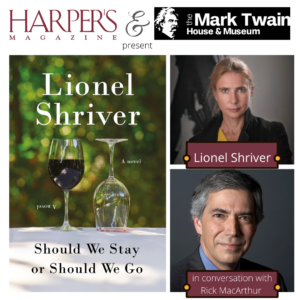 Harper’s Magazine and the Twain House are proud to present author and journalist, Lionel Shriver, discussing her brilliant and thought-provoking new novel, SHOULD WE STAY OR SHOULD WE GO, with Harper’s President and Publisher John R. McArthur.

When her father dies, Kay Wilkinson can’t cry. Over ten years, Alzheimer’s had steadily eroded this erudite man into a paranoid lunatic. Surely one’s own father passing should never come as such a relief.
All too familiar with the decay that often comes with age and determined to die with dignity, Kay and her husband Cyril agree to commit suicide together once they’ve both turned eighty. When their deal is sealed, the spouses are blithely looking forward to another three decades together. But then they turn eighty.
SHOULD WE STAY OR SHOULD WE GO portrays twelve parallel universes, each exploring a possible future for Kay and Cyril. Were they to cut life artificially short, what would they miss out on? Something terrific? Or something terrible? What future for humanity awaits—the end of civilization, or a Valhalla of peace and prosperity? What if cryogenics were really to work? What if scientists finally cure aging?
Both timely and timeless, SHOULD WE STAY OR SHOULD WE GO addresses serious themes and a host of contemporary issues from Brexit and mass migration to the coronavirus.
FREE program, but donations are gratefully accepted. REGISTER HERE.
Signed copies of Should We Stay or Should We Go are available for purchase via the Mark Twain Store.  ]Books will be shipped after the event. We regret that we are NOT able to ship books outside the United States as it is cost-prohibitive to do so.
———————————
About Lionel Shriver:
Lionel Shriver’s fiction includes The Mandibles; Property; the National Book Award finalist So Much for That; the New York Times bestseller The Post-Birthday World; and the international bestseller We Need to Talk About Kevin, adapted for a 2010 film starring Tilda Swinton. Her journalism has appeared in The Guardian, The New York Times, Wall Street Journal, and many other publications. She’s a regular columnist for the Spectator in Britain and Harper’s Magazine in the US.
———————————
About John R. MacArthur:
John R. (Rick) MacArthur is president and publisher of Harper’s Magazine and an award-winning journalist and author. Under his leadership, the magazine has received nineteen National Magazine Awards, the industry’s highest recognition. He writes monthly columns for the Providence Journal and, in French, for Montreal’s Le Devoir newspaper. His critically acclaimed first book, Second Front: Censorship and Propaganda in the Gulf War, won the Illinois ACLU’s 1992 Harry Kalven Freedom of Expression award and was a New York Times notable book.
Programs at The Mark Twain House & Museum are made possible in part by support from the Connecticut Department of Economic and Community Development, Office of the Arts, and the Greater Hartford Arts Council’s United Arts Campaign and its Travelers Arts Impact Grant program, with major support from The Travelers Foundation. For more information call 860-247-0998 or visit marktwainhouse.org