Harper’s Magazine and The Mark Twain House & Museum present: The Life of the Mind 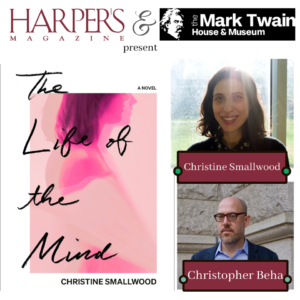 “Christine Smallwood’s debut novel is that rare thing: an intellectual page-turner that commands one’s attention completely from the first sentence to the final line.”—Andrew Martin, author of Early Work and Cool for America

As an adjunct professor of English in New York City with no hope of finding a permanent position, Dorothy feels “like a janitor in the temple who continued to sweep because she had nowhere else to be but who had lost her belief in the essential sanctity of the enterprise.” No one but her boyfriend knows that she’s just had a miscarriage, not even her therapists—Dorothy has two of them. Nor can she bring herself to tell the other women in her life: her friends, her doctor, her mentor, her mother. The freedom not to be a mother is one of the victories of feminism. So why does she feel like a failure?

Piercingly intelligent and darkly funny, The Life of the Mind is a novel about endings: of youth, of professional aspiration, of possibility, of the illusion that our minds can ever free us from the tyranny of our bodies.

Christine Smallwood is a contributing writer at the New York Times Magazine and a contributing editor at Harper’s Magazine. Her writing has appeared in The Paris Review, n+1, Vice, The New Yorker, Bookforum, T, and many other magazines. She has a PhD in English from Columbia University.

Christopher Beha is the editor of Harper’s Magazine. His most recent novel, The Index of Self-Destructive Acts, was nominated for the 2020 National Book Award.

This program is free to attend.  REGISTER HERE!

Signed copies of The Life of the Mind will be available for purchase through the Mark Twain Store; proceeds benefit The Mark Twain House & Museum. Books will be shipped after the event. We regret that we are NOT able to ship books outside the United States as it is cost-prohibitive to do so.