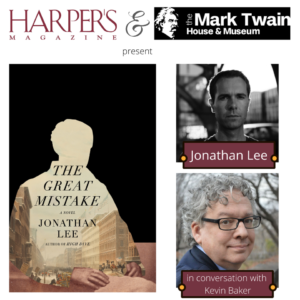 Harper’s Magazine and The Mark Twain House & Museum join forces to present a thrilling new work of historical fiction about the life — and mysterious murder — of a legendary Manhattanite in Gilded Age New York.
Andrew Haswell Green is dead, shot at the venerable age of eighty-three, when he thought life could hold no more surprises. The killing–on Park Avenue, in broad daylight, on Friday the thirteenth–shook the city. Green was born to a poor farmer, yet without him there would be no Central Park, no Metropolitan Museum of Art, no Museum of Natural History, no New York Public Library. And Green had a secret, a life locked within him that now, in the hour of his death–alone, misunderstood–is set to break free. As the detective assigned to Green’s case chases his ghost across the city, we meet a wealthy courtesan, a brokenhearted man in a bowler hat, and a lawyer turned politician whose decades-long friendship with Green is the source of both his troubles and his joys. A work of tremendous depth and piercing emotion, The Great Mistake is the story of a city transformed, a murder that made a private man infamous, and a portrait of a singular individual who found the world closed off to him–yet enlarged it.
Joining novelist Jonathan Green (High Dive) will be columnist, novelist, editor and historian Kevin Baker (The Fall of a Great American City: New York and the Urban Crisis of Affluence)
FREE virtual program, but donations are gratefully accepted. To register, CLICK HERE!
Signed copies of The Great Mistake are available for purchase through the Mark Twain Store and can be purchased in advance. Proceeds benefit The Mark Twain House & Museum. Books will ship after the event. We regret that we cannot ship outside of the U.S. at this time.