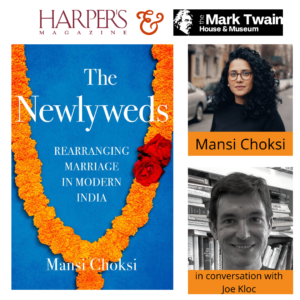 In India, two out of every three people are under the age of thirty-five. These are men and women whose worlds stretched open with the arrival of the internet and social media. But when it comes to love and marriage, they’re expected to adhere to thousands of years of tradition. It’s that tension between obeying tradition and embracing modernity that drives journalist Mansi Choksi’s The Newlyweds.

Through vivid, lyrical prose, Choksi shines a light on three young couples who buck against arranged marriages in the pursuit of love, illustrating the shame, anger, triumph, and loss of their choices set in play.

Against the backdrop of India’s beautiful villages and cities, Choksi introduces our newlyweds. First, there’s the lesbian couple forced to flee for a chance at a life together even as the courts strike down a colonial-era law criminalizing homosexuality. Then there’s the Hindu woman and Muslim man who escaped their families under the cover of night after being harassed by a violent militia group. Finally, there’s the inter-caste couple who are doing everything to avoid the same fate as a similar couple who were kidnapped and murdered.

Engaging and moving, The Newlyweds raises universal questions, such as: What are we really willing to risk for love? If we’re lucky enough to find it, does it change us? If so, for the better? Or for the worse?

Copies of NEWLYWEDS are available for purchase through the Mark Twain Store; proceeds benefit The Mark Twain House & Museum. Books will be shipped after the event. We regret that we are NOT able to ship books outside the United States as it is cost-prohibitive to do so.

Mansi Choksi is a graduate of the Columbia School of Journalism and two-time Livingston Award Finalist. Her writing has appeared in the New York Times, Harper’s, National Geographic, the Atlantic, and more. She lives in Dubai with her husband and son. The Newlyweds is her first book. Follow her on Twitter @Mansi_Choksi.