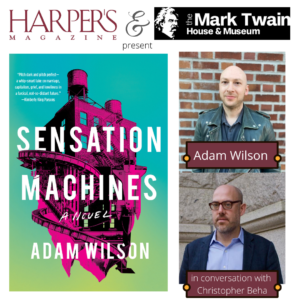 Harper’s Magazine and The MTH&M continue our collaboration with Adam Wilson discussing his razor-sharp, darkly funny, and deeply human rendering of a Post-Trump America in economic free fall. Harper’s Editor Christopher Beha moderates. Michael and Wendy Mixner are a Brooklyn-based couple whose marriage is failing in the wake of a personal tragedy. Michael, a Wall Street trader, is meanwhile keeping a secret: he lost the couple’s life savings when a tanking economy caused a major market crash. And Wendy, a digital marketing strategist, has been hired onto a data-mining project of epic scale, whose mysterious creator has ambitions to solve a national crisis of mass unemployment and reshape America’s social and political landscapes. When Michael’s best friend is murdered, the evidence leads back to Wendy’s client, setting off a dangerous chain of events that will profoundly change the couple—and the country.Set in an economic dystopia that’s just around the corner, Sensation Machines is both an endlessly twisty novel of big ideas, and a brilliantly observed human drama that grapples with greed, automation, universal basic income, wearable tech, revolutionary desires, and a broken justice system. Adam Wilson implicates not only the powerbrokers gaming the system and getting rich at the intersection of Wall Street, Madison Avenue, Silicon Valley, and Capitol Hill, but all of us: each one of us playing our parts, however willingly or unwillingly, in the vast systems that define and control our lives.
FREE virtual program with donations gratefully accepted. REGISTER HERE.
Signed copies of Sensation Machines will be available for purchase through the Mark Twain Store; proceeds benefit The Mark Twain House & Museum. Books will be shipped after the event. We regret that we are NOT able to ship books outside the United States as it is cost-prohibitive to do so.
———————
Adam Wilson is the author of the novel Flatscreen, a National Jewish Book Award finalist. His stories have appeared in The Paris Review, Tin House, and The Best American Short Stories, among many other publications. In 2012 he received the Terry Southern Prize, which recognizes “wit, panache, and sprezzatura” in work published by The Paris Review. He teaches creative writing at New York University and lives in Brooklyn.
Programs at The Mark Twain House & Museum are made possible in part by support from the Connecticut Department of Economic and Community Development, Office of the Arts, and the Greater Hartford Arts Council’s United Arts Campaign and its Travelers Arts Impact Grant program, with major support from The Travelers Foundation.