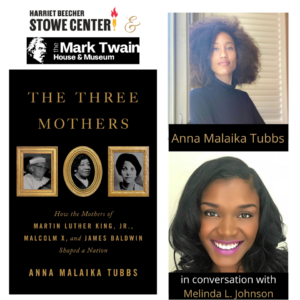 Much has been written about Berdis Baldwin’s son James, about Alberta King’s son Martin Luther, and Louise Little’s son Malcolm. But virtually nothing has been said about the extraordinary women who raised them. In her groundbreaking and essential debut The Three Mothers, scholar Anna Malaika Tubbs celebrates Black motherhood by telling the story of the three women who raised and shaped some of America’s most pivotal heroes.

Berdis Baldwin, Alberta King, and Louise Little were all born at the beginning of the 20th century and forced to contend with the prejudices of Jim Crow as Black women. These three extraordinary women passed their knowledge to their children with the hope of helping them to survive in a society that would deny their humanity from the very beginning—from Louise teaching her children about their activist roots, to Berdis encouraging James to express himself through writing, to Alberta basing all of her lessons in faith and social justice. These women used their strength and motherhood to push their children toward greatness, all with a conviction that every human being deserves dignity and respect despite the rampant discrimination they faced.

This program is free, but donations will be gratefully accepted and split evenly between the Harriet Beecher Stowe Center and The Mark Twain House & Museum. REGISTER HERE.

Signed copies of The Three Mothers can be purchased through The Mark Twain Store. Books will be shipped after the event. We regret that we cannot ship books outside of the U.S. at this time.

—————————————
Anna Malaika Tubbs is a Cambridge Ph.D. candidate in Sociology and a Bill and Melinda Gates Cambridge Scholar. After graduating Phi Beta Kappa from Stanford University with a BA in Anthropology, Anna received a Master’s from the University of Cambridge in Multidisciplinary Gender Studies. Outside of the academy she is an educator, DEI consultant, and the First Partner of Stockton, CA. She lives with her husband, the mayor of Stockton, Michael Tubbs, and their son Michael Malakai.

Melinda L. Johnson is an advocate and innovator. Dedicated to serving her community, Melinda is a spiritual leader serving as the Leading Lady of Urban Hope Refuge Church and a commissioner of the Permanent Commission on the Status of Hartford Women. She believes equity and justice will only coexist when the voices and perspective of black and brown people are centered in racial justice, gender equity and economic restructuring. Melinda is the wife of Pastor Ashley J. Johnson and mother of two amazing sons Ashton and Addison.