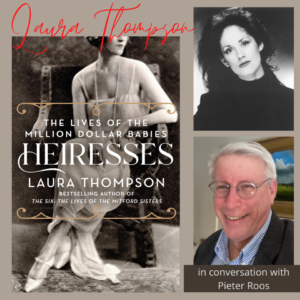 New York Times bestselling author Laura Thompson joins MTH&M Executive Director Pieter Roos live from the UK for a virtual lunchtime conversation on her new book HEIRESSES: The Lives of the Million Dollar Babies.
Heiresses: surely they are among the luckiest women on earth. Are they not to be envied, with their private jets and Chanel wardrobes and endless funds? Yet all too often those gilded lives have been beset with trauma and despair. Before the 20th century a wife’s inheritance was the property of her husband, making her vulnerable to kidnap, forced marriages, even confinement in an asylum. And in modern times, heiresses fell victim to fortune-hunters who squandered their millions.Heiresses tells the stories of these million dollar babies: Mary Davies, who inherited London’s most valuable real estate, and was bartered from the age of twelve; Consuelo Vanderbilt, the original American “Dollar Heiress”, forced into a loveless marriage; Barbara Hutton, the Woolworth heiress who married seven times and died almost penniless; and Patty Hearst, heiress to a newspaper fortune who was arrested for terrorism. However, there are also stories of independence and achievement: Angela Burdett-Coutts, who became one of the greatest philanthropists of Victorian England; Nancy Cunard, who lived off her mother’s fortune and became a pioneer of the civil rights movement; and Daisy Fellowes, elegant linchpin of interwar high society and noted fashion editor.Heiresses is about the lives of the rich, who―as F. Scott Fitzgerald said―are ‘different’. But it is also a bigger story about how all women fought their way to equality, and sometimes even found autonomy and fulfillment.
–
FREE virtual program, although donations are gratefully accepted. REGISTER HERE.
–
Copies of Heiresses are available for purchase through the Mark Twain Store; proceeds benefit The Mark Twain House & Museum. Books will be shipped after the event. We regret that we are NOT able to ship books outside the United States as it is cost-prohibitive to do so.
———————
ABOUT THE AUTHOR
LAURA THOMPSON won the Somerset Maugham award for her first book, The Dogs, and is the author of the New York Times bestseller The Six: The Lives of the Mitford Sisters. Other books include the critically-acclaimed Life in a Cold Climate, a biography of Nancy Mitford, and Agatha Christie: A Mysterious Life, which was nominated for an Edgar Allen Poe award in 2019.
–
Programs at The Mark Twain House & Museum are made possible in part by support from the Connecticut Department of Economic and Community Development, Office of the Arts, and the Greater Hartford Arts Council’s United Arts Campaign and its Travelers Arts Impact Grant program, with major support from The Travelers Foundation. For more information call 860-247-0998 or visit marktwainhouse.org