HELL OF A BOOK: Jason Mott in conversation with Vivian Nabeta 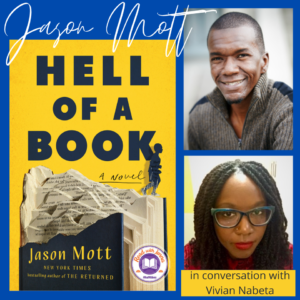 An astounding work of fiction from a New York Times bestselling author, both incredibly funny and honest, that goes to the heart of racism, police violence, and the hidden costs exacted upon Black Americans, and America as a whole. Author Jason Mott is joined in conversation by Vivian Nabeta.

In Hell of a Book, an African-American author sets out on a cross-country book tour to promote his bestselling novel. That storyline drives Jason Mott’s novel and is the scaffolding of something much larger and more urgent: since his novel also tells the story of Soot, a young Black boy living in a rural town in the recent past, and The Kid, a possibly imaginary child who appears to the author on his tour.

Throughout, these characters’ stories build and build and as they converge, they astonish. For while this heartbreaking and magical book entertains and is at once about family, love of parents and children, art, and money, there always is the tragic story of a police shooting playing over and over on the news.
Who has been killed? Who is The Kid? Will the author finish his book tour, and what kind of world will he leave behind? Unforgettably powerful, an electrifying high-wire act, ideal for book clubs, and the book Mott says he has been writing in his head for ten years, Hell of a Book in its final twists truly becomes its title.

FREE virtual program, although donations are gratefully accepted. REGISTER HERE.
Signed copies of Hell of a Book will be available for purchase through the Mark Twain Store; proceeds benefit The Mark Twain House & Museum. Books will be shipped after the event. We regret that we are NOT able to ship books outside the United States as it is cost-prohibitive to do so.
——————————
About Jason Mott:
Jason Motthas published three previous novels. His first novel, The Returned, was a New York Times bestseller and was turned into a TV series that ran for two seasons. He has a BFA in Fiction and an MFA in Poetry, both from the University of North Carolina at Wilmington. His poetry and fiction have appeared in various literary journals.
About Vivian Nabeta:
Vivian Nabeta considers herself a creative spirit with who fell in love with the arts at a young age. Her professional background is a mix of arts and culture administration, marketing, audience development, and event management. She began her professional career at Hartford Stage, Amistad Center for Arts & Culture, and the Harriet Beecher Stowe Center. She now serves as the Director of Marketing and Public Relations at Capital Community College in Hartford, CT. She is on the board of the New Haven Museum as well as the Ugandan American Nakuwadde (pronounced Nah-koo-wah-day) Mission Project (UANMP). In 2018 she was invited to become a member of the Lamont/Bysiewicz Arts and Culture Transition Sub-Committee, where she assisted in the development of an arts and culture focused agenda for then Governor-Elect Ned Lamont and Lt. Governor-Elect Susan Bysiewicz. Vivian has a Bachelor of Arts in Theater Studies from the University of Connecticut and a Master of Arts in American Studies from Trinity College.
Programs at The Mark Twain House & Museum are made possible in part by support from the Connecticut Department of Economic and Community Development, Office of the Arts, and the Greater Hartford Arts Council’s United Arts Campaign and its Travelers Arts Impact Grant program, with major support from The Travelers Foundation. For more information call 860-247-0998 or visit marktwainhouse.org