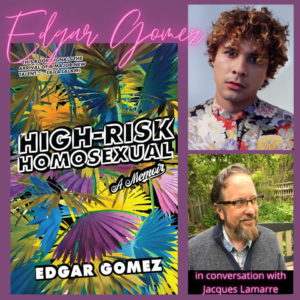 A debut memoir about coming of age as a gay, Latinx man, High-Risk Homosexual opens in the ultimate anti-gay space: Gomez’s uncle’s cockfighting ring in Nicaragua, where he was sent at thirteen years old to become a man. Readers follow Gomez through the queer spaces where he learned to love being gay and Latinx, including Pulse Nightclub in Orlando, a drag queen convention in Los Angeles, and the doctor’s office where he was diagnosed a “high-risk homosexual.”

With vulnerability, humor, and quick-witted insights into racial, sexual, familial, and professional power dynamics, Gomez shares a hard-won path to taking pride in the parts of himself he was taught to keep hidden. His story is a scintillating, beautiful reminder of the importance of leaving space for joy.

Copies of HIGH-RISK HOMOSEXUAL signed by the author are available for purchase through the Mark Twain Store; proceeds benefit The Mark Twain House & Museum. Books will be shipped after the event. We regret that we are NOT able to ship books outside the United States as it is cost-prohibitive to do so.

Edgar Gomez (he/she/they) is a Florida-born writer with roots in Nicaragua and Puerto Rico. A graduate of University of California, Riverside’s MFA program, he is a recipient of the 2019 Marcia McQuern Award for nonfiction. His words have appeared in Poets & Writers, Narratively, Catapult, Lithub, The Rumpus, Electric Lit, Plus Magazine, and elsewhere online and in print. His memoir, High-Risk Homosexual, was called a “breath of fresh air” by The New York Times. He lives in New York and Puerto Rico. Find him or her or them across social media @OtroEdgarGomez.