HOW CIVIL WARS START: Professor Barbara Walter in conversation with Megan Torrey of the World Affairs Council of CT 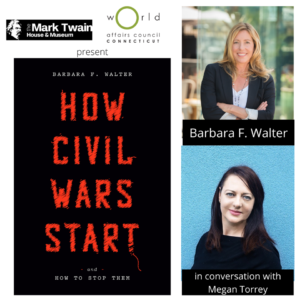 The Mark Twain House & Museum and the World Affairs Council of CT welcome professor and political scientist Barbara Walter joined in conversation by CTWAC’s CEO Megan Torrey for a discussion of Professor Walter’s new book HOW CIVIL WARS START AND HOW TO STOP THEM.

Over the last two decades, the number of active civil wars around the world has almost doubled. Drawing on the latest international research and lessons from over twenty countries, Walter identifies the crucial risk factors, and reveals the warning signs – where wars tend to start, who initiates them, and what triggers them.

A civil war today won’t look like America in the 1860s, Spain in the 1930s, or Russia in the 1920s. It will begin with sporadic acts of violence and terror, accelerated by social media. It will sneak up on us and leave us wondering how we could have been so blind.

HOW CIVIL WARS START Redefines civil war for a new age, providing the framework we need to confront the danger we now face–and the knowledge to stop it before it’s too late.

FREE virtual event, although donations are gratefully accepted. Donations will be split evenly between The Mark Twain House & Museum and CTWAC. REGISTER HERE.

Copies of HOW CIVIL WARS START signed by the author are available for purchase through the Mark Twain Store; proceeds benefit The Mark Twain House & Museum. Books will be shipped after the event. We regret that we are NOT able to ship books outside the United States as it is cost-prohibitive to do so.

Barbara F. Walter, Ph.D., is the Rohr Professor of International Affairs at the School of Global Policy & Strategy at the University of California, San Diego and one of the world’s leading experts on civil wars, political violence, and terrorism. Her books include the award-winning Committing to Peace: Why Negotiations fail, Reputation and Civil War, and Civil Wars, Insecurity, and Intervention.

Walter is a permanent member of the Council on Foreign Relations, a frequent live guest on CNN, and an active consultant for the World Bank, the United Nations, and the Departments of Defense and State. She occasionally writes for the Washington Post, the Wall Street Journal, and the Los Angeles Times.

As CEO of the Work Affairs Council of CT, Megan oversees the development and delivery of world class programming that educates the community on global affairs. Recently, Megan implemented a nation-wide World Affairs Council series focused on global women’s health, helped pilot a leadership mission to Brazil, and produced a mini-documentary on Henry Kissinger that featured several former Secretaries of State. Megan holds degrees in international relations and diplomacy and her research interests include inclusive security and the role of women in post-conflict situations and citizen participation in foreign policy.

Before joining the World Affairs Council in 2003, she worked with UNESCO’s International Year for the Culture of Peace at the headquarters in Paris and at the United Nations International Training Research Institute for the Advancement of Women.

About the World Affairs Council of Connecticut:

The World Affairs Council of Connecticut (CTWAC) is a nonprofit, nonpartisan organization that promotes greater awareness and dialogue on important global issues. With an emphasis on community engagement and collaboration, the Council creates experiences that explore critical global issues and promote a greater understanding of the world.