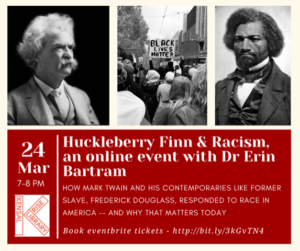 In 1900, Mark Twain helped open the Kensal Rise Library public reading room in London with a gift of five books. After the library was closed by the Brent Council in 2011, the residents of Kensal Rise reached out to The Mark Twain House & Museum for support. We were only too happy to join the chorus of neighbors and authors rallying to have the library restored, which happily it was when it re-opened as a community library in 2019.

Register to join this event by CLICKING HERE.

**NOTE: For all Americans, please be aware that the donation amount you enter is in British pounds, not U.S. dollars. The charge to your credit card will reflect the conversion rate.**