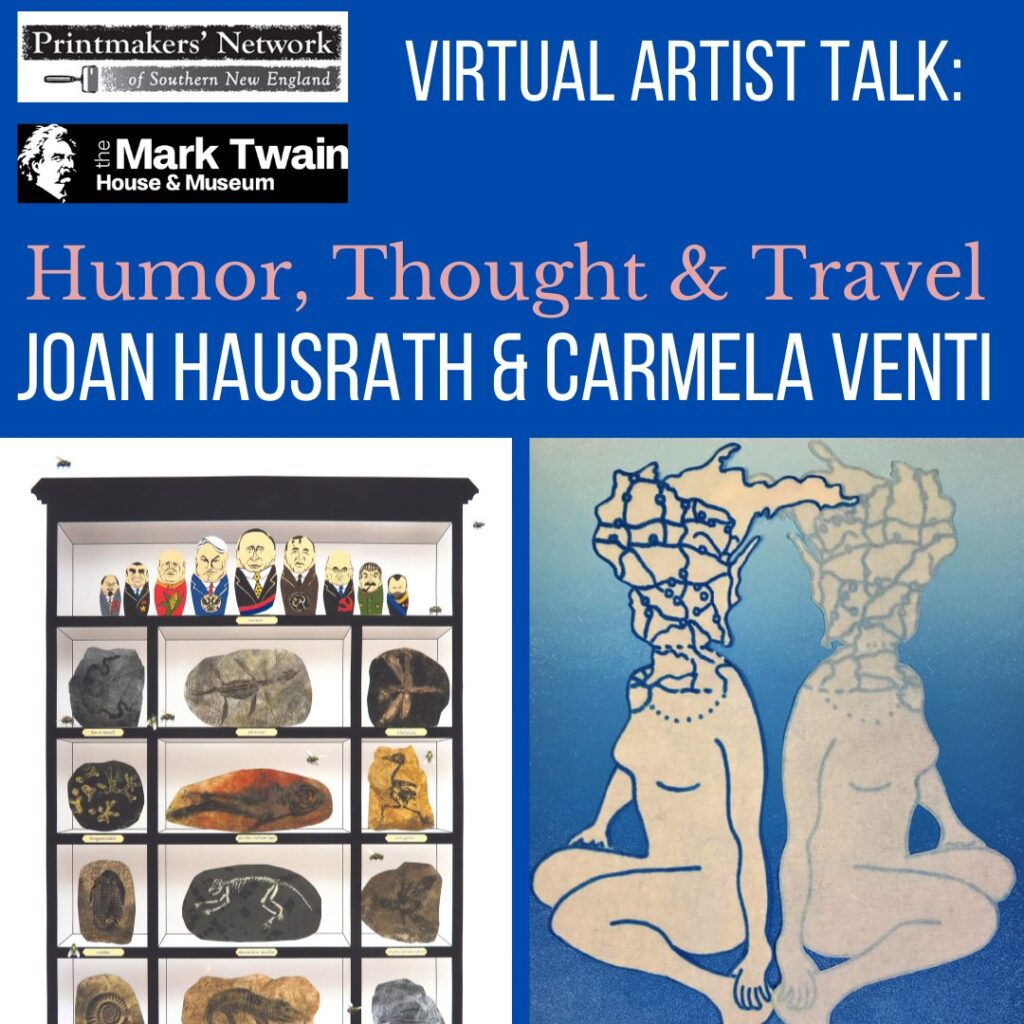 Artist Joan Hausrath will discuss the creation of two prints inspired by quotes by Mark Twain that reveal his poignant satire and humor, often which he used to entertain his readers and to offer his personal views of human nature.  While one of the quotes is taken from a description of fashions worn by women attending a fancy ball in San Francisco in 1863, the other quote, not published until 1972, is an excerpt in Mark Twain’s Fables of Man.

Carmela Venti will be talking about actual and virtual journeys of the creative process and will be discussing how her Venti’s Map Portraits, created with multi-printmaking media, use maps metaphorically to visually portray idioms and Everyman’s thoughts. Venti felt synchronicity to Twain’s quotes, life, and work. She will speak about her artwork in the exhibition and other pieces in relationship to her Mark Twain experience.

The Evocative Mark Twain Inspires the Printmakers’ Network of Southern New England is on view at The Mark Twain House & Museum beginning March 24, 2022 with a free opening reception at 5:30pm and is set to run through January 23, 2023. The museum is open daily from 10AM to 4:30PM. Admission to the exhibition is included in house tour admission; museum center-only tickets including The Evocative Mark Twain… is $7.25. For information and tour reservations, please visit  MarkTwainHouse.org.

Joan Hausrath, an artist and curator, holds an MFA in Printmaking from Bowling Green State University in Ohio and an MA in the History of Art from Ohio State University. She is Professor of Art Emerita from Bridgewater State University in Massachusetts where she taught printmaking, design and art history. For the past twenty-five years Hausrath has investigated non-toxic alternatives to traditional printmaking processes and has received several grants to support her research. She has participated in residencies at the Edinburgh Printmakers Studio in Scotland; Studio Camnitzer in Valdottavo, Italy; and New Grounds Print Workshop in Albuquerque, NM. She exhibits in the US, internationally by invitation, and her artwork is in numerous private and public collections.

Carmela Venti, a former president of the Connecticut Women Artists, Inc., and affiliated with Southern Graphics, received her Bachelor and Master of Arts degrees in printmaking from the University of the Arts, Philadelphia and the Rhode Island School of Design respectively. Her work as a technical illustrator and graphic designer influences her prints. Venti has taught at universities throughout Connecticut—Central, Southern, New Haven, Bridgeport and Hartford Art School.